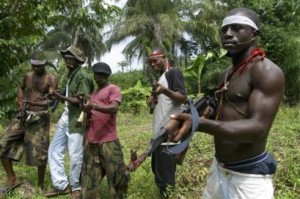 The proposed declaration of a Republic of Niger Delta today by a militant group known as the Adaka Boro Avengers (ABA) is said to have been cancelled by the group itself.

SEE: Niger Delta To Be A Republic August 1 – Militant Group

The group released a statement via its spokesperson, ‘General’ Edmos Ayayeibo stating the reason for the cancelation.

The group stated its reason for its previous proposed declaration of a Niger Delta republic wasn’t for selfish reasons but because “the Nigerian government has enslaved the people of Niger Delta region.”

“We adhere to the voice of our people, because our struggle is for the Niger Delta people and not for selfish reason. But this is not the end. More is yet to come.

“Our mission to cripple the economy of the Nigerian nation will not stop until the Nigerian government is ready to sit on a roundtable to dialogue and to restructure the Nigeria.

The group also called on the Federal Government against any dialogue with the Movement for the Emancipation of the Niger Delta (MEND). Referring to the latter as ”greedy old fools.”

“Unless that, we will not stop until Nigeria becomes a zero economy. We are also saying this for the benefit of President Muhammadu Buhari and Nigerian government to stop wasting their time with those greedy fellows that call themselves MEND because nothing good will come out of them rather than sabotage.

“Those old fools cannot stop us and they know it very well. We know what they are after is all about stipends.

“Everything they are saying, not even one will be accomplished. We will never agree with anything they say and henceforth MEND should watch their back because we have tolerated them for a very long time.

“Enough is enough, since they want to set confusion in the Niger Delta we will start from them.”