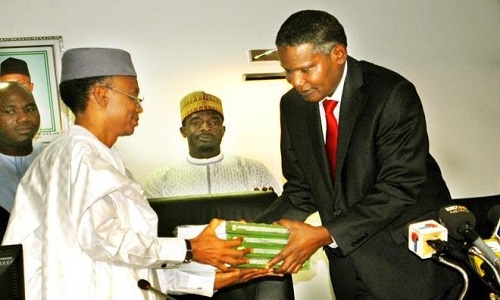 The Kaduna State Government on Sunday released the full report of the Judicial Commission of Inquiry it set up to unravel the immediate and remote cause of the December 12, 2015 clash between soldiers and members of the Islamic Movement in Nigeria (IMN), in Zaria and proffer solutions to prevent a recurrence.

The clash left at least 347 IMN members, also known as Shi’ites, dead and several others injured or permanently maimed when soldiers, drawn from the Nigerian Army Depot in Zaria, Kaduna State, unleashed their might on the sect for allegedly attempting to assassinate the Chief of Army Staff, Lt.-Gen. Tukur Buratai, who was in the town on official engagements.

Following the large-scale killing of the Shi’ite members, including women and the young, as well as claims of uneven use of force by the Army, the state governor, Malam Nasir El-Rufai, set up a Judicial Commission of Inquiry headed by Justice Mohammed Garba, of the Appeal Court, Rivers State Division, in January of this year.

The panel submitted its findings on July 15.

Gov. El-Rufai said he made the document public even though a white paper inquiry was still underway.

“A nine-member White Paper Drafting Committee has commenced work on studying the report and its recommendations. While the White Paper process is ongoing, the Kaduna State Government has decided to release the report on its website”, the state said in an accompanying statement.

The executive summary of the report said the federal government, Kaduna State government, the IMN, the Nigerian Army and other security and law enforcement agencies, committed acts that resulted in the clashes.

It blamed the state government particularly, for not moving swiftly to curtail previous acts of the Shi’ite sect while it blamed the federal government ‎for allowing the Army to use excessive force and not complying with the rules of engagement during the clash.

It also blamed the leader of the IMN, Sheik Ibraheem El-Zakzaky, who is presently in “protective custody” on the orders of the federal government, for not having absolute control over his members and not calling them to order when required to do so.

It recommended that all incidents of violence and aggression by the members of the IMN against individuals, groups or communities, which had resulted in grievous bodily harm, destruction of properties and deaths, should be fully investigated and the culprits brought to book. Where appropriate, compensations should be paid.

“The state government should investigate and repossess all illegally acquired public lands from IMN and utilize same for public interest. IMN should be made to conform to all constitutional requirements and the provisions of other by-laws in obtaining land, building or acquiring structures.

“It must conform to all building regulations, however, whenever and wherever it so desires to build or acquire land or property. All the dangerous weapons recovered from the IMN members should be turned over to the Police for further necessary action.

“The government should deal with the IMN in accordance with the laws and regulations of the land and be made to conduct its activities and affairs within the ambit of the law at all times. Intelligence reports by security agencies regarding threats to security, law and order should be taken seriously and acted upon timeously to nip in the bud such occurrence”, the report said in part.