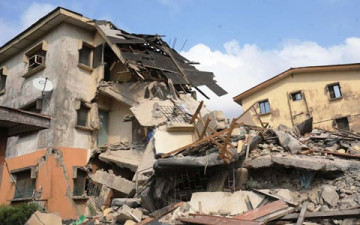 On this day in 2010, a condemned building collapsed in Abuja and killed 23 people. Squatters who lived there described jumping from two storeys up to escape.

The building, condemned as dangerous by the authorities and which was thought to be four or five floors high, tumbled down at around dawn on Wednesday in the Garki Area 11 neighbourhood of Abuja, south of the central business district.

Nigeria’s Federal Capital Territory Minister at the time, Bala Muhammed,who was  responsible for development in Abuja, said on the building had been condemned by the authorities and developers had continued to add an additional floor despite the warnings.