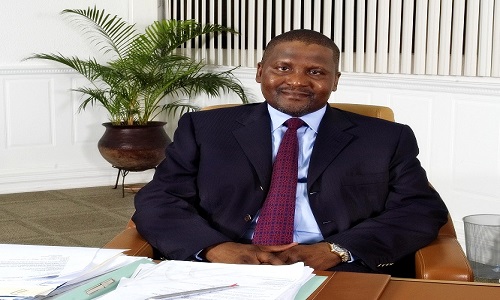 On this day in 2015;Zambian President, Edgar Lungu  lauded the business ingenuity of the President of Dangote Group, Aliko Dangote saying his business expansion across Africa is worthy of emulation by African businessmen in the task of continental development.

Also on this day in 2015;NATIONAL  Assembly Election Petition Tribunal sitting in Asaba, the Delta State capital, was taken aback when a middle aged man identified as Christopher Anirah, who was presumed  dead,  made  a surprise appearance to testify before it.

Anirah, was subpoenaed by the tribunal to give evidence in an  election petition matter between Hon. Gibson Ighofose Akporehe of the All Progressives Congress, APC,  and Hon. Evelyn Omavowan Oboro, of the  Peoples Democratic Party, PDP, told the tribunal that his death certificate was allegedly forged by the APC House of Representatives candidate.

Meanwhile, Hon Evelyn Oboro, in her preliminary objection, asked  the tribunal to dismiss Akporehe’s petition for lack of  merit, saying it is an abuse of court process. Akporehe who is the candidate of APC in Okpe, Sapele and Uvwie federal constituency in the 2015 election, through his counsel, Mr  Charles Umweni, had told the tribunal that the witness he intends to call (Anirah)  cannot come to the tribunal to testify, claiming that he died after suffering a cardiac attack. But, at the resumed hearing of the matter, yesterday, in Asaba, somebody who claimed to be Anirah stormed the tribunal and stepped into the witness box to give evidence when the chairman of the three-man tribunal panel, Justice Adebukole Banjoko, called out the name.

The sudden appearance of the said Anirah  created commotion in the tribunal  as  the bewildered  audience started shuffling and murmuring in low tones over the appearance of a ‘dead man’ in court, prompting  Justice Banjoko to call for calm.

And on this day in 2014;Former President Goodluck Jonathan stressed the need for a revolutionary expansion of the oil and gas industry for the country to become the leading African nation in the sector.

He said: “The nation’s gas known to be of much quantity than oil, when maximally utilised, will not only boost the economy and create employment, but will to a very large extent, reduce cases of gas flaring to its barest minimum by 2020.”