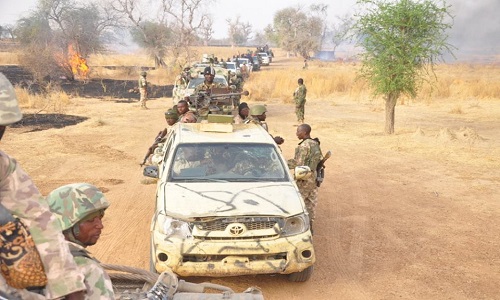 In the latest victory by the Nigerian troops in the fight against terrorism, about five suspected Boko Haram insurgents were killed and arms and ammunition recovered on Monday when the troops of Operation Lafiya Dole accompanied by Civilian JTF repel attacks from the dreaded sect.
In a statement released by the Acting Director Army Public Relations, Col. Sani Kukasheka Usman, the attack happened in Yauri Community, just outskirt of the Borno State capital.

“We are glad to inform the public that the general area is calm, while troops have deployed to maintain security in the village and environs”, Col. Usman stated in the statement.