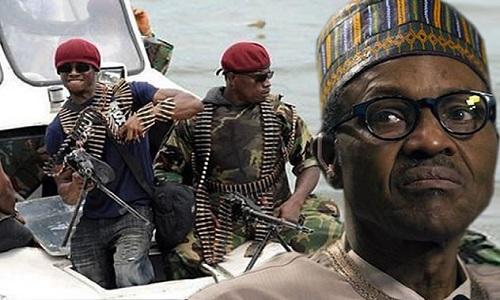 The Niger Delta Avengers (NDA) has declared an end to hostilities. It made the announcement in an ‘open letter’ posted on its website by its spokesman, Mudoch Agbinibo, and addressed to President Muhammadu Buhari.

The NDA, whose attacks on oil installations in the region cut Nigeria’s crude oil production by 700,000 barrels a day to 1.56mpd, however, called for what it said was “genuine and positive attitude” on the part of the federal government in its offer of dialogue.

The president had while speaking at a bilateral meeting with Japanese Prime Minister, Shinzo Abe, on the sidelines of the just-concluded 6th International Conference on African Development (TICAD) in Nairobi, Kenya, advised Niger Delta militants, Avengers inclusive, to accept his government’s offer of dialogue or get ready to be dealt with like Boko Haram Terrorists.

In the open letter posted on its website, the militant group, which penultimate weekend declared a ceasefire, alleged that the Federal Government was out to execute a predetermined genocide against the people of the Niger Delta through the recently launched military exercise codenamed Operation Crocodile Smile.

The Nigerian military high command, however, denied the claim, explaining that the exercise was just a training drill designed to prepare the Amphibious Division for a better mastery of the Niger Delta terrain.

The NDA also observed that the Nigerian system would work better if the Federal Government learns from the developed democracies to allow internal protests and conflicts aimed at greater good of the nation.

The letter reads in part: “We call on President Muhammadu Buhari to put away the garb of a stooge to the imperialists, whenever he speaks outside Nigeria. We have listened carefully and halted hostilities in the Niger Delta. We expect a genuine and positive attitude to restructuring and self-determination for every component unit of Nigeria. Dear president, what makes those countries (Japan, Germany, France, USA, Britain etc.) great is the ability of their governments to accommodate internal protestations and conflicts for the greater good of their nations over the years.

“Nigeria is not a one-man personal property. We must have these talks every time if this union must continue to work as one. The people of the Niger Delta have been living here from time immemorial, so we have the secret of the terrain and survival of amphibious operations.

“No amount of troop surge and simulation exercises will make you win the oil war; you can only win battles. You cannot apply the might of the state to restore the people’s confidence in your leadership when you cannot differentiate between genuine demands and being mismanaged by disorganised characters and tribal lords around you in your government that are playing the court jesters’ role as well as counting the days that is left in your four years term.

“You can deceive the whole world but we cannot be deceived by the so glamorized ongoing military operations in the creeks of Ijaw communities in the Delta coded “ Operation Crocodile Smiles”… the world should know that with your pronouncement in Kenya and your attitude to the military build-up in the Niger Delta, it is crystal clear that the military has nothing less than a pre-determined genocide in Niger Delta and burn more already scared national resources to the pockets of those that have failed to locate the missing Chibok School Girls.

“Conclusively, dear President Muhammadu Buhari, please also tell those foreign nations that you are always at ease talking to, while refusing to listen to Nigerians that your troops are about carrying out extrajudicial killings in the Niger Delta in violation of Article Four of the Geneva Convention with ‘OPERATION CROCODILE SMILE’. All sane minds know the meaning of ‘CROCRODILE TEARS’ so by code-naming your military operation CROCODILE SMILES only betrays your motives and attitude to the whole world about the Niger Delta question. The whole world will surely applaud you in The Hague when you leave office! This is not the Nigeria and the world of the 1980s and 1990s under General Sani Abacha and your watch”.

Meanwhile, the Presidency has welcomed the cessation of all forms of hostilities by the Avengers.

Special Adviser to the President on Media and Publicity, Femi Adesina, in a terse statement, described the declaration as “a good development which is in the interest of the country and especially the Niger Delta people”.

Mr. Adesina noted that “anything that portends peace is always good”, adding that “we hope that it cuts across board and it is sincere”.