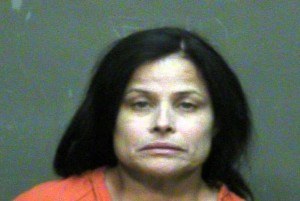 A woman has been arrested in the US for killing her daughter whom she believed was possessed by the devil. She forced a crucifix down her throat until blood gushed out, police say.

Juanita Gomez, 49, of Oklahoma City was arrested by police on charges of killing her daughter, Geneva, whose body was found by authorities stretched out on the floor with a large crucifix resting on her chest.

“Blood was visible, and she had suffered severe trauma around her head and face,” said court documents filed on Monday.

Court documents also revealed that Juanita cleaned her daughter’s dead body after placing it in a cross position.

She told investigators that she believed her daughter, 33, who was living with her, had demons inside her.

According to investigators, she admitted to punching Geneva multiple times “and forced a crucifix and religious medallion down her throat until blood came out of her daughter’s mouth. Juanita saw her daughter die and then placed her body in the shape of a cross.”

Geneva Gomez’s ex-boyfriend, Francisco Merlos, said he was the one who alerted authorities to her death.

According to reports, he and Geneva split two days before her death, and he went by the house on Saturday hoping to get back together with her.

When he knocked, Juanita opened the door and pulled him inside.

“[Geneva] was lying on her back with the cross on her chest,” he said. “You couldn’t even recognize her face.”

Merlos tried to leave the home, but Gomez tried to lock him in the house.

“I just push her to the side, open the door and she tries to get me in a chokehold,” he added.

When Merlos got outside, he called 911.

Juanita is being held without bail.