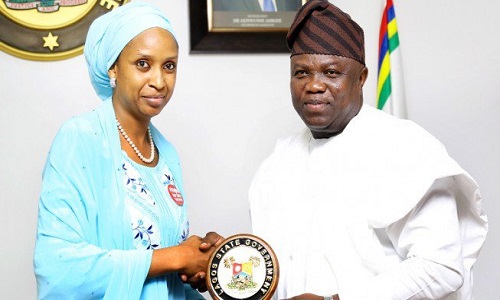 Governor of Lagos State, Mr. Akinwunmi Ambode on Wednesday expressed optimism that the ongoing efforts to permanently resolve traffic congestion in the Apapa axis due to activities at the Port, would soon yield the desired results.

The governor, who spoke at the Lagos House, Ikeja when he received the management team of the Nigeria Ports Authority (NPA) led by its Managing Director, Hadiza Bala Usman on a courtesy visit, said he was highly desirous of giving the Apapa axis a facelift.

While expressing confidence in the ability of the new NPA management to make positive difference, Ambode said he was extremely delighted that the authority was being led at this time of economic crisis by a thoroughbred professional, who he noted, is equally grounded in the political terrain.

Governor Ambode stressed that Lagos, being the commercial nerve centre and a city surrounded by water, deserved more than one port.

He, therefore, declared his administration’s readiness to partner with and support the NPA to succeed in whatever form needed.

“We have had issues about movement of cargo and every other vehicular movement that relates to traffic congestion in the Apapa axis and I think with the new management in charge of NPA, a whole lot of things will be resolved so quickly and I am very glad that this is the way we have decided to go and we will support everything to make Apapa a place that we will all be delighted to speak about”, he said.

The governor also commended the NPA for investing in the Lekki Deep Sea Port project, saying that there was no doubt about the fact that such partnership would go a long way in driving more investment into Lagos.

Earlier, Usman said she was at the Lagos House with her team to expand the existing relationship between the NPA and the Lagos State Government for the benefit of the people.

Speaking with reporters at the Lagos House, she said the major area of partnership principally centered on decongestion of Apapa gridlock as soon as possible and the success of the Lekki Deep Sea Port project, among others.

“We discussed various areas of cooperation and one of the priorities was the decongestion of the Apapa area. We have looked at the priority activities that we need to do to decongest the area and we would proceed with that in the next few weeks.

“There are several partnerships that exist and we intend to forge ahead with them. We have the Lekki Deep Sea Port development which both Lagos State Government and the Federal Government of Nigeria through the NPA have shareholdings. We believe that it is a project which we need to take forward within the shortest period. We have reaffirmed our partnership and commitment to drive the project and we want to do that within the shortest period”, Usman said.