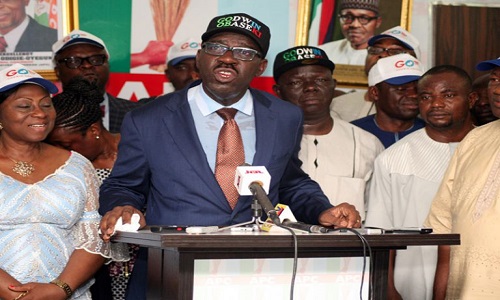 The opposition Peoples Democratic Party (PDP) in Edo State has dragged candidate of the All Progressives Congress, APC, Godwin Obaseki to court, seeking his disqualification from the governorship election on Saturday, September 10.

The party alleged that the APC flag bearer had provided false information on oath to the Independent National Electoral Commission (INEC), and therefore not qualified to contest the governorship election.

Chairman of the PDP in Edo State, Dan Orbih, who stated this at a press briefing in Benin, the state capital yesterday, lamented that voters would be at risk if they “waste their votes for the APC because the party has no candidate for the election”.

According to him, “We have asked the Federal High Court in Benin for a declaration that Mr. Obaseki’s statement that he graduated from the University of Ibadan with a B.A in Classical Studies in 1976 was false.

“In addition, the party is asking for a declaration disqualifying Obaseki from contesting the Edo state governorship election scheduled for September 10, 2016 on grounds that he submitted false information on oath to the INEC on Form CF001 (and) therefore lied under other”, Mr. Orbih said.

“In all, Obaseki has failed to fulfil the requirements of the Constitution which in Section 182 (I) h) specifies the qualifications a person must have to contest the governorship of a state”, the Edo PDP chairman said.

Joined in the suit No. FHC/B/CO/120/16 dated September 1 and filed by Joseph Aghimien, on behalf of the PDP and its legal adviser, Edoba Omoregie, were Obaseki and INEC.

Meanwhile, leaders of the PDP led by the Caretaker Committee Chairman, Senator Ahmed Makarfi arrived Benin yesterday ahead of the election.

Also in the state are Governors Nyesom Wike of Rivers State, Ifeanyi Okowa of Delta State; Chairman of the PDP’s Board of Trustees (BoT), Senator Walid Jibrin and the Deputy Governor of Bayelsa State, Rear Admiral John Jonah (retd) and many others.

Speaking at a meeting of PDP leaders Tuesday evening, Gov. Wike expressed confidence that the party’s candidate, Pastor Osagie Ize-Iyamu, will win the election if conducted based on the rule of law.

He, however, cautioned that “the battle will not be an easy one”.