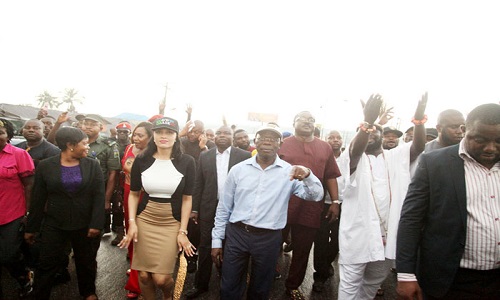 The trio of Ikimi, Igbinedion and Dokpesi were rooting for the Peoples Democratic Party (PDP) candidate in the election, Pastor Osagie Ize-Iyamu.

The governor said the APC is committed to dismantling the rigging machine of those he described as political godfathers in the state.

Oshiomhole noted that Edo is the only state where election had been held in recent times without bloodshed, adding that nobody died.

He said the victory had concluded his chapter in the struggle to end godfatherism in the politics of Edo.

He told reporters after the results were announced that “Over the last eight years, we have tried to orientate our people not just the voters but politicians that the season of election rigging where one or two godfathers wrote the results is over and we were committed to dismantling the rigging machine.

“We had a rerun in 2012 with all the godfathers on one side and new forces of change on my side, I won in all the 18 local government areas.  Our people have spoken loud and clear that they believe in democracy, they just don’t want to be beneficiaries, they want to be the drivers of the process. This was showed by the way they conducted themselves on Election Day.

“It is outstanding and remarkable that tensed as the election was, out of 18 local governments, we won in 15 decisively. Those who were loudest in making noise had been revealed where they stand in relation with Edo people.

“We have humbled Chief Tom Ikimi even in the local government he claimed to have created. We defeated Chief Raymond Dokpesi in his polling unit, his Ward and his local government. That reassures that the ruthless deployment of media machinery is not enough to distort or the will of Edo people to determine their choice.

“In Okada, the political family that has boasted that they would continue to govern this state and even compelled the state to adopt them as the queen of England whose birthday must be celebrated. In Okada, the APC was the preferred party by the people than that family in Okada.

“There is something unique in the way things have turned out. In Esan land, the senatorial zone of the PDP godfather, we won two out of the five local governments. We gave him a fight that he managed to escape. He used the factor of his age to play on the emotion of the people. It is a victory for the people of the state. Edo people are now proud they can now determine who rules them and no one godfather can choose a leader for them. When you look at the propaganda, you will think we had fallen for the lion”.