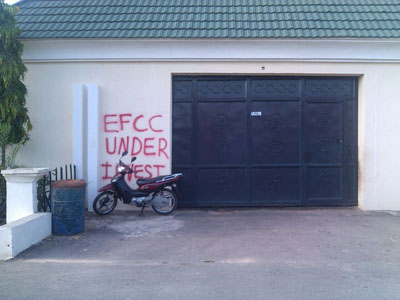 The former governor of Katsina State, Ibrahim Shema, who is currently under investigation for alleged diversion of N18 billion belonging to the government has had three of his houses sealed on Monday by the the Economic and Financial Crimes Commission, EFCC.

The three houses located at Madoji Road in the GRA, Madachi Road in Barhim Housing Estate and Kirni Road in Makera Estate along Daura Road, all in Katsina were cordoned off following interaction with the ex-governor.

According to a source in the EFCC who pleaded anonymity, Shema was grilled for some hours on more contracts executed during his tenure.

“Also, in line with the ongoing probe, we have placed three houses of the ex-governor in Katsina under Interim Assets Forfeiture  – in line with Sections 28 and 34 of the EFCC (Establishment Act) 2004 and Section 13(1) of the Federal High Court Act, 2004,” the source said.

“We have restricted the movement of the ex-governor to the country until the conclusion of the investigation. Shema is still in our custody. We have a warrant to detain him for a while.” the source explained.

It will be recalled that Shema was declared wanted by the EFCC, following a petition by the State Governor, Aminu Masari of alleged diversion of N18.6billion by himself, his sons and cronies.

However, the ex-governor who willingly submit himself to the EFCC, blames his successor for witch-hunting

Reacting to the development, Oluwabusola Olawale, the media aide to the former governor said: “We have reiterated it on different occasions that he {Shema} has nothing to fear and he is ever ready to defend himself, but he should not be subjected to political and media trial.

“All he wants is fairness, justice and equity in accordance with the rule of law. Shema left Katsina State as a debt-free state despite the massive infrastructural development during his eight year tenure.”