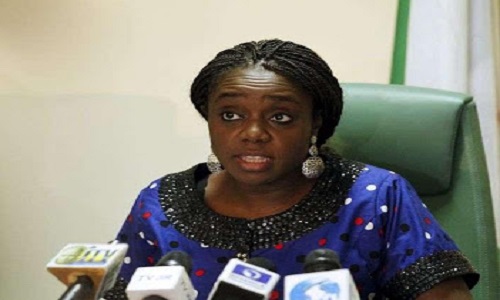 Minister of Finance, Kemi Adeosun, has come under severe fire from a cross-section of Nigerians, especially on social media, for her comments that recession is just a word.

The minister, who was reported to have made the comments via her Twitter handle @Mrskemiadeosun, disowned the account yesterday, saying she is not on the micro-blogging platform.

However, following the controversy that trailed her comments, we did a little finding of our own and this is what we came up with – while the said Twitter handle may not have belonged to Mrs. Adeosun, she indeed, made the comments attributed to that account.

We also discovered that in an attempt to defend and possibly, correct insinuations that she tried to play down the report of the National Bureau of Statistic, which officially declared that Nigeria had entered into a recession, Mrs. Adeosun may have lied.

Her spokesman, Festus Akanbi, had while distancing his principal from the Twitter account, said yesterday that “The Twitter handle, @Mrskemiadeosun, does not belong to the Honourable Minister of Finance. At no point did she make that kind of statement in her interaction with the media after the Federal Executive Council meeting on Wednesday. The fake handle does not belong to her”.

Our investigations, however, put a lie to the claim by Mr. Akanbi that the minister did not say “recession is a word” during her interaction with the media.

While the tweets have since been deleted, we have a video confirming that she indeed, made the comment (watch from 0:53 mark).

Min of Finance @Mrskemiadeosun: 'The diversification agenda is not a rhetoric.' #Economy #Diversification #Nigeria pic.twitter.com/ljI945DxQv 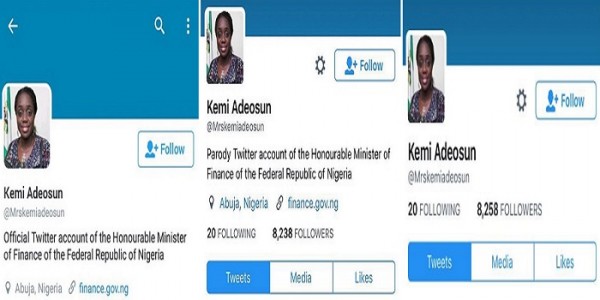 In spite of the fact that the handle has been tweeting and retweeting quotes by the minister, her colleagues, President Muhammadu Buhari and sharing official pictures from Mrs. Adeosun’s outings, it comes as a strange surprise that no formal rebuttal was issued by the minister all this while to disown the account, as is the norm, until this current controversy.

However, this tweet by the Office of Digital Engagement in the Presidency, may have put to rest this ‘anomaly’.

On 08/03/2016 @MrAshaye asked us about Mrs. Kemi Adeosun's Twitter accounts and this was our response back then.. pic.twitter.com/l38uq3HUiX

Notwithstanding, it remains to be seen how Mrs. Adeosun will wriggle herself out of this current media storm, especially from social media users, who do not suffer fools gladly.

See where d now parody acct tagged so many NGR official accounts, but no one noticed it was a parody acct right? https://t.co/rGrZfvKlz3

Instead of kemi Adeosun to just apologize for the comment, she choose to lie. Lying liars all of them

Up until a few days ago, members of the presidential media team quoted @mrskemiadeosun, the handle she now denies https://t.co/546dzrkpq2

Dear President @MBuhari, please show that you have some decency left in you; ask Kemi Adeosun to resign, or fire her for lying to Nigerians.

in this video @Mrskemiadeosun said 'recession is a word' shame https://t.co/uPbMzP5njL

All tweets from @Mrskemiadeosun are being deleted as we tweet.

They are keeping vigil until all tweets are gone. Kudos to the parody Madam