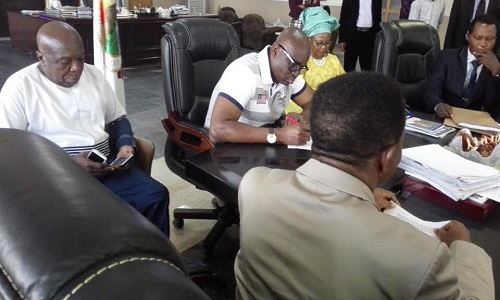 The initial budgetary provision of N67 billion was upped to N70.5billion to accommodate the ongoing dualisation of Ado Ekiti-Ikere road project and other projects that could not be captured in the revised budget.

In a chat with journalist shortly after the signing ceremony, Fayose explained that he decided to seek for the input of the Ekiti House of Assembly after the removal of the airport project earlier budgeted for in the 2016 budget, from the state’s fiscal policy.

He said: “What we budgeted for in the 2016 budget was a sum of N67 billion and now it has been jacked up to N70 billion.

“We intended to build an airport in the budgetary estimate earlier prepared but the court judgment filed by land owners stalled it and we intend to introduce new projects which we have to accommodate in our budgetary spending”.

The governor noted that the revised budget would take care of the new Ado-Ikere dual carriage way and other emergency projects being executed in the state.

“But this does not in any way pose any threat or disturb the original budget. In financial policy, the law must be followed to prevent diversion and leakages in the system”, Fayose added.

Present at the signing were: Rt. Hon. Kola Oluwawole, Deputy Speaker, Hon Segun Adewumi, Chief of Staff, Mr. Dipo Anisulowo and other members of the State House of Assembly.