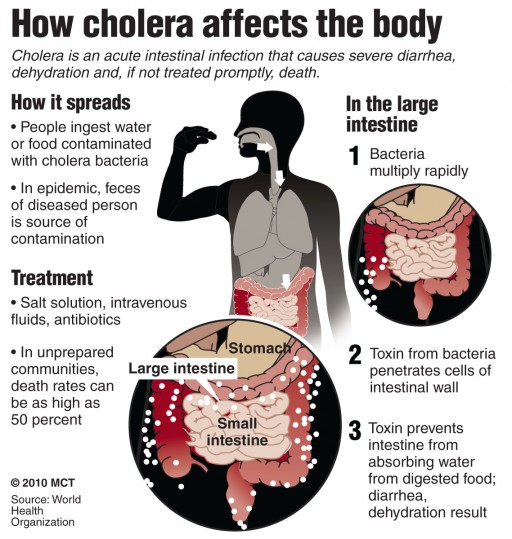 The State Commissioner of Health, Dr. Jide Idris while giving update on the outbreak in a news conference on Wednesday, said two out of the six victims were dead on arrival. He added that 36 cases have been successfully managed in various hospitals across the state while four people are currently responding to treatment.

According to the commissioner, the main source of the outbreak has been traced to local consumption of Salad called “Abacha”, a staple food of the residents of Isolo council area.

“Some domestic wells within the communities are also suspected. Sample of Abacha salad and well water have been collected and sent to the Lagos State Drug Quality Control Laboratory for analysis.

“Samples were collected from 15 cases and taken to the central public health laboratory, Yaba. There were no growths, however continuous culture yielded Vibro cholerae from 7 out of 15 samples. The Vibro cholera was late confirmed to be Ogawa strain,” he explained.

“The report of the analysis revealed the presence of vibro cholerae, Salmonella species and E. Coli in abacha and one of the two well water samples.”

“All the three cases are still on admission and in stable conditions. 17 of the cases were managed at private health facilities in Isolo. Out of the 17 cases three died.

All 14 cases on admission have been discharged”, he said. He noted that the symptoms of the disease includes nausea, profuse diarrhoea, vomiting, fever, leg cramps, and in severe cases leads to dehydration, coma or death.

“The risk of contracting the disease is mainly by poor water and environmental sanitation, including open defecation”, he alerted.

Calling on Lagosians to imbibe personal hygiene and other control measures instituted by the state government, he said, “Lagosians should endeavour to wash their hands with soap and water frequently and thoroughly, especially after using the rest room.

Boil water before drinking, especially if you are not sure of the source of water.”

He also appealed to Lagosians to stop open defecation, which has been linked to outbreak of cholera and diarrhoea.