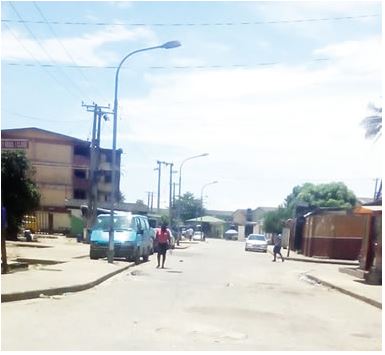 A 35-year-old man, Ejike Onyejekwe, has been killed in the FESTAC Town area of Lagos State.

PUNCH Metro learnt that the victim, who lived on 21 Road, K Close, FESTAC, was stabbed to death after winning a lot of money from a lottery.

Our correspondent gathered that Onyejekwe, to celebrate the winning, bought drinks for his friends and threw a party last Thursday and Friday.

It was learnt that on Friday evening, he was heard arguing with an unidentified person on the phone.

He allegedly told his friend he was going to see the man, but never returned.

His corpse was allegedly discovered the next day on one of the estates.

A resident, who did not want to be identified, said the chairman of the estate called the attention of residents to the corpse on Saturday.

He said, “I was sipping tea around 7am when I heard the chairman blowing a whistle. I thought it was strange, but my wife called my attention to the surging crowd on the estate.

“I went downstairs and saw the corpse on the road. Like everybody, I was alarmed. We could not tell how the corpse got there or who he was. He had multiple stab injuries in the head. We all resolved that the case should be reported at the FESTAC Police Station.”

It was learnt that some of the victim’s friends later identified him.

The corpse was said to have been deposited in a morgue, while the police arrested and detained the chairman of the estate and his secretary; they were later released.

A source told PUNCH Metro that the victim won a lottery few days to his death.

He said, “The man won a lot of money in a lottery and from last Thursday to Friday, he was asking his friends to drink at his expense.

“He was called on the phone that Friday evening and he went to meet a man. I suspect that a gang stabbed him and used an object to hit him in the head. There were bruises on his knees and it appeared they dragged him on the floor as well.

“When the police were removing his corpse, blood was dripping from his mouth and nostrils. He was murdered in cold blood.”

A friend of the victim, who did not identify himself, said his relative had visited the community.

“I can’t say why he was killed. Nobody knows. He just returned from a visit to the village,” he added.

The Police Public Relations Officer, SP Dolapo Badmos, confirmed the incident, adding that the case had been transferred to the State Criminal Investigation and Intelligence Department, Yaba.

She added that the police had already arrested two suspects in connection with the death.

She said, “The chairman of one of the estates reported that at about 7am, he woke up and saw the victim lying lifeless with injuries on his head and body. The corpse was deposited at the Isolo General Hospital Mortuary for autopsy. Two suspects, Suleiman Ahmed and Ibrahim Yusuf, were arrested and the case transferred to the SCIID for further investigation.”