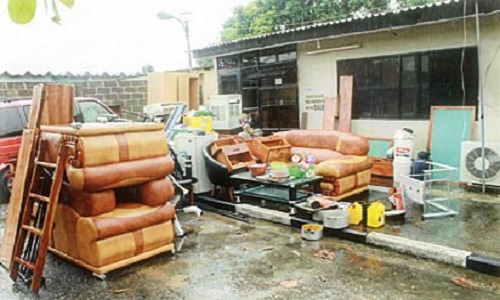 Five tenants in Esan North East Local Government Area of Edo State have been evicted from their homes by their landlord for openly rooting for the All Progressives Congress (APC) to defeat the Peoples Democratic Party (PDP) in this Saturday’s governorship election in the state.

The landlord, whose name was given as Mr. David Agberemole, is a PDP supporter.

The tenants – Mr. Sylvester Chukwuemeka, Okosun Christiana and Ogbeide Elizabeth – who lamented the fate that befell them for supporting the APC, said they suffered untold hardship from their landlord for their political choice.

One of the tenants, Okosun Christiana, who spoke in her native dialect (Esan) said, “We don’t have any problem, just party differences, he told us he wanted everyone in the house to support PDP, because he is a member of the party, but I refused.

“I told him that I have been in APC for a very long time that even if the PDP is buying me a car I prefer to remain in the APC, and he said since that is my stand; I should consider myself evicted from his house”, she narrated.

Also speaking, another of the evicted tenants, Sylvester Chukwuemeka, revealed that his rents were up to date, adding that the action of their landlord negates the principle of fair play and justice just because they refused to support the PDP.

“I don’t understand why the landlord will just decide to drive us out of his house because we are not supporting PDP. I pay my rent regularly and this is not fair to me.

“The state government should come to our aid because I don’t know when it became a crime to support a party”.

Chukwuemeka also called on relevant authorities to come to their aid.

Meanwhile, Acting Executive Chairman of Edo State Internal Revenue Service, Barr. Emmanuel Usoh, has donated some bags of cement and money to the evicted tenants to build their own houses.