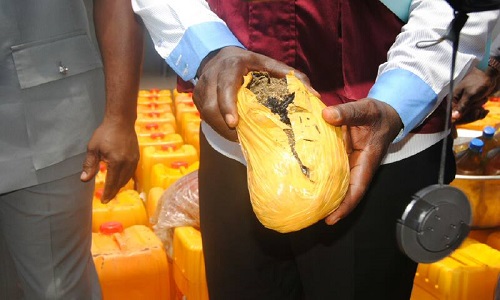 The National Drug Law Enforcement Agency (NDLEA) has foiled a plot by a suspected drug trafficker to use innocent passengers to smuggle cannabis carefully packaged in noodles to China via the Akanu Ibiam International Airport (AIIA) Enugu.

The anti-narcotics agency during the screening of passengers, also apprehended a clearing and forwarding agent, who ingested seventy-four (74) wraps of cocaine while attempting to board an Ethiopian airline flight to China.

Both suspects have attributed their involvement in drug trafficking to high exchange rate and economic recession.

The Chairman/Chief Executive of the Agency, Muhammad Mustapha Abdallah, called on members of the public particularly passengers, not to collect consignments from people.

Abadallah, a retired Colonel, said “This is a plot by suspected drug traffickers to use innocent passengers in smuggling drugs. Some persons may have fallen into this wicked plot if not for the timely intervention of the Agency.

“It is instructive that people be aware of this trick because what they consider as an assistance may just send them to prison or early graves. This is because drug trafficking is punishable by death in China”.

Abdallah added that passengers must exercise caution in accepting bags from people.

“To an average passenger, the suspected bag contained noodles but during search operations, the packs of noodles turned out to be cannabis. In the past, we have recovered drugs hidden inside books, parcels and even letters. It is important therefore that members of the public must act with utmost caution and avoid acts that could turn them into drug traffickers”.

The NDLEA commander at the Enugu airport, Adeofe Adeyemi, gave the names of the suspects as Adibe Wisdom Baloba, 47, and Esonwunne Onyechi Benson, 31.

“Adibe was caught during outward screening of passengers on an Ethiopian airline flight to China. He was found to have ingested 74 wraps of substance that tested positive for cocaine with a weight of 1.417kgs.

“The second suspect Esonwunne was caught attempting to send a luggage containing cannabis to China through an unsuspecting passenger. The cannabis was carefully prepared inside packs of noodles to avoid detection. Investigating officers are working very hard on the cases and the suspects will soon be charged to court”, Adeofe stated.

Meanwhile, preliminary investigation by the NDLEA revealed that Esonwunne was twice deported from China in 2008 and May 2016 on immigration related offences.

Benson during interrogation, blamed his involvement on economic recession.

“I am a trader but due to the economic downturn I decided to smuggle cannabis to China. I concealed the drug neatly in packs of noodles because cannabis is expensive there. I was waiting for a passenger that will assist me in sending the bag of cannabis to China when NDLEA officers arrested me”, he stated.

On his own part, Baloba, who is a father of five children, said that he accepted five thousand dollars to smuggle cocaine to China.

“I am a clearing and forwarding agent but financial hardship and bad economy forced me into drug trafficking. The exchange rate is very high and I hardly get money to take care of my family. My sponsor promised to pay me the sum of five thousand dollars to take the drug to China. In the process of boarding the aircraft, I was arrested by NDLEA officers”, he stated.