The Minister of Finance, Mrs. Kemi Adeosun, on Wednesday said the country is already getting out of the economic recession, given the steps the Federal Government is taking to reverse the trend.

Mrs Adeosun made this bold statement while speaking with reporters immediately after the end a two-day National Council of Finance and Economic Development conference which took place at the Green Legacy Resort, Olusegun Obasanjo Presidential Library, Abeokuta, Ogun State.

According to her, since the issue economic crisis started steps have been taken to block waste, the road to recovery was sure.

“We are already getting out of recession because of the actions the Federal Government is taking.

“We are investing more in capital than we have ever invested. We are sorting out infrastructure, we are stopping wastage and so the signs of recovery are already there,” she said.

She explained that agriculture and solid minerals are already starting to grow, as they are responding to government’s policy initiative.

Adeosun said stakeholders from 36 states across the country had brainstormed for two days while resource persons also delivered papers, adding that the economic recovery would be driven at the state and local government levels.

She advised finance commissioners and the accountant-generals in the states to compute their balance sheets, which would show their assets and liabilities. 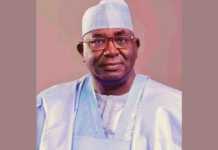