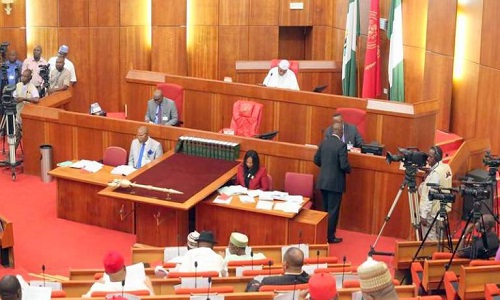 The Senate on Tuesday said there were signs that the 2019 general elections would be inconclusive without enough Resident Electoral Commissioners (RECs) to oversee it.

This followed a motion by Deputy Senate President Ike Ekweremadu and supported by the Senate Leader Ali Ndume.

Ekweremadu expressed concerns that the rate of inconclusive elections in many states showed that the Independent National Electoral Commission (INEC) was endangering the nation’s democracy.

He alleged that at least 20 states had no REC, adding that the development was contrary to the Third Schedule of the 1999 Constitution, as amended.

“The developments after a few electoral exercises carried out so far by our electoral umpire have left much to be desired.

“We are worried about the fate of the 2019 general elections in the face of the present state of inconclusive elections and postponements.

“We are worried that the trend of inconclusive elections and whimsical postponement of elections are wrong signals and symptoms that cannot just be dismissed with the wave of hands”, he said.

Ndume, on his part, said the lawmakers would be failing if they saw something wrong and failed to point it out.

“It is better to take wrong decisions than not to take any decision at all”, he said.

The Deputy Senate Leader Bala Na’Allah said it was unfair that certain sections of Nigeria were not being represented in the National Assembly, saying it is contrary to the constitution.

Also contributing, Sen. Eyinnaya Abaribe declared that elections conducted so far by INEC were illegitimate as more than one-third of the INEC commissioners were yet to be appointed.

Adopting the prayers of the motion, the Senate called on President Muhammadu Buhari to immediately nominate suitably qualified persons to fill the vacant positions in INEC.

The Senate also called for the enhancement of the capacity of the electoral commission to conduct conclusive elections.

It further called on INEC to immediately conclude all pending elections.

It also mandated the Senate committee on INEC to hold a public hearing to review the performance of the commission in the last one year.

The public hearing, according to the red chamber, is to ascertain factors responsible for the challenges in the electoral system as witnessed.

INEC was further directed to conclude the delineation of additional constituencies across the country.

The decision of the Senate is expected to be forwarded to the president for compliance.

In his ruling, Senate President Bukola Saraki urged INEC to conclude elections in the affected constituencies and ensure the vacant positions were filled.