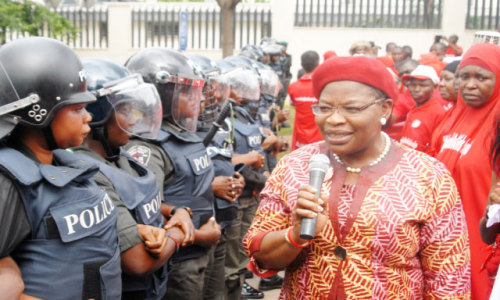 The Socio-Economic Rights and Accountability Project (SERAP) has drawn the attention of the United Nations to what it said is the continuous harassment and intimidation of the #BringBackOurGirls (BBOG) advocacy group by the Nigerian authorities, and the impermissible restrictions on the rights of members to freedom of expression and peaceful assembly.

The group, in an urgent appeal dated September 9, 2016 signed by its senior staff counsel, Timothy Adewale and addressed to Mr. Maina Kiai, the UN Special Rapporteur on the rights to freedom of peaceful assembly and of association, described as unjustifiable and in bad faith, the reported ban of protests in the Federal Capital Territory (FCT) by the Inspector General of Police, Idris Ibrahim.

Mr. Ibrahim, in a move targeted at the BBOG, which holds daily sit-outs at the Unity Fountain, Central Business District of the FCT, warned against illegal processions in the nation’s capital.

The police chief specifically viewed with concern, the activities of the BBOG, led by a former Minister of Education, Oby Ezekwesili, saying it was capable of breaching the peace of the FCT.

However, following criticisms that trailed his comment from a cross-section of Nigerians including Mrs. Ezekwesili and a human rights advocate, Femi Falana (SAN), IGP Idris backtracked, saying he never banned protests in the FCT or anywhere for that matter.

The BBOG group has been at the fore-front of the campaign for the safe return of over 200 Chibok schoolgirls abducted since 2014 by the extremist group, Boko Haram.

In the appeal signed by Mr. Adewale, SERAP pointed out that, “No Nigerian law makes it a crime to demonstrate in any part of the country. Harassing the BBOG group and stopping its members from proceeding peacefully to the seat of government is overkill”.

The urgent appeal reads in part: “It’s the primary duty of the President Muhammadu Buhari government to protect all demonstrators, including the BBOG group and enable lawful demonstrations to proceed peacefully. Carrying out this obligation is about deeds, not words.

“SERAP considers restrictions placed on the right of the BBOG group to peaceful assembly by law enforcement agencies as unnecessary, disproportionate, unjustified in law, and in bad faith.

“The ability of the BBOG group to organize, mobilise and speak out on matters of the missing Chibok girls cannot be prohibited under any grounds whatsoever. SERAP considers the freedom of assembly and to take part in the conduct of public affairs as a means for public expression and the cornerstone of democracy and the rule of law. Every Nigerian has the right, without prior permission, to assemble peacefully and protest, even if the authorities disagree with the views of the protesters.

“There is in fact a positive obligation on the Nigerian government to take reasonable steps to protect members of the BBOG group from disruption by others. SERAP believes that peaceful protest is also a means to gather support from civil society on issues that affect those demonstrating, and is part of the exercise of an active and participatory democracy.

“The right to freedom of peaceful assembly protects Nigerians’ ability to come together for the common good, and serves as the vehicle for the exercise of many other human rights. When the right to peaceful assembly is suppressed, there is a higher risk for demonstrations to escalate and turn violent”.

SERAP, therefore, requested Mr. Kiai to put pressure on the Nigerian government to end continuing harassment and restrictions on the right of members of the BBOG group to protest and take measures to encourage, promote and facilitate the enjoyment of the right to peaceful assembly by this group and other group of Nigerians in any part of the country.

It also urged the UN Special Rapporteur to among others, remind the government that the task of the police is to protect rights and facilitate, rather than frustrate demonstrations, as well as to promote criminal and disciplinary sanctions against those who interfere with public assemblies; appreciate and recognize the positive role of peaceful protests as a means of strengthening human rights and democracy in the country; remind the Nigerian authorities that the organization of a protest should not be subject to prior authorization, and that organizers of peaceful assemblies like members of the BBOG group should not be criminalized for not requesting an authorization.