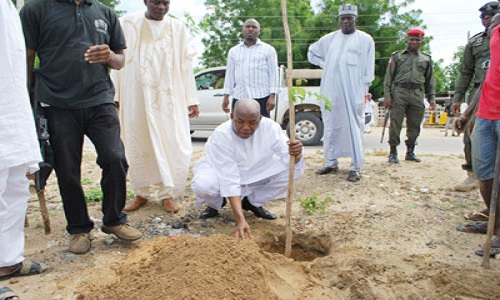 Governor Kashim Shettima of Borno State yesterday, observed the Eid prayers at Konduga, one of the towns liberated by the Nigerian military from Boko Haram insurgency.

Shettima arrived at Konduga, about 9.45AM, accompanied by top government officials, including Director-General of the National Orientation Agency (NOA) Garba Abari, Senator Bashir Garbai (Borno Central), Senator Abubakar Kyari (Borno North), and Speaker of the House of Assembly, among others.

He was warmly received by the council Chairman, Audu Ladan and District Head, Zanna Masu Yale.

Also, welcoming the governor and his entourage was a large number of Internally Displaced Persons (IDPs), who returned home two weeks ago.

The Eid prayer was led by the Imam Eidaini of Konduga, Imam Goni Lawan, who later slaughtered his ram in the presence of Shettima to pave the way for others to slaughter theirs.

The governor explained his decision to mark the Eid-el-Kabir prayers outside Maiduguri, the state capital, the first time any sitting governor in the state would do that.

According to him, the move was symbolic of the liberation of major towns and communities, which hitherto, were occupied by Boko Haram or deserted by inhabitants, as a result of the activities of the insurgents.

“So, Konduga is a mere symbol here, representing all the liberated communities. We are here in solidarity with them, to celebrate the Sallah with them, to strengthen the fact that they are no less important than those who were not affected by the insurgency, to reaffirm our commitment to the resettlement of IDPs.

“We came to share this moment with them and to reassure them that we wouldn’t have allowed them to return to Konduga if it was classified unsafe, this is why we are here with them. We are determined to restore the dignity of our people, to reinstall civil authority, to rebuild their schools, hospitals, markets and homes so they can return to safe homes and I want to reiterate that we will not allow our citizens to return to unsafe communities.

“I urge you to reach out to poor neighbours. Part of the essence of slaughtering rams is to share the meat with the needy, with those who couldn’t afford to make the sacrifice and not for us to slaughter rams and share with rich neighbours or store in refrigerators to take care of our menus for months to come; the meat is meant to be shared with the needy.

“We should always remember the downtrodden every step of the way. Borno is known for hospitality, and that hospitality should be demonstrated through good neighbourliness and peaceful co-existence”.