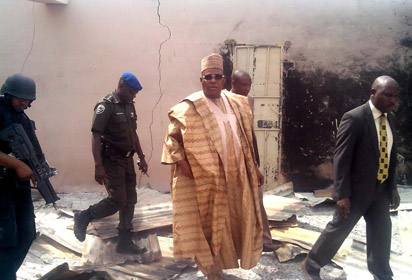 “We will rebuild churches, private and public buildings destroyed by the insurgents”, the governor promised when he assessed the level of damage in Lassa, Askira-Uba Local Government Area on Wednesday.

He expressed shock at the magnitude of destruction, saying that the government would commence the rehabilitation in a short while.

“We are going to rebuild churches and others structures destroyed in Lassa and other communities around.

“We are saddened by the large scale destruction in Lassa which is a predominantly Christian community”, Mr. Shettima said.

“We are doing this because we have a duty as a government to ensure fairness, equity and justice in all our endeavors.

“We believe that the Christian community has rights to be served like its Muslims counterpart, since we have rebuilt Mosques destroyed in other places, we must rebuild churches too”, he added.

Mr. Shettima said the churches would be rebuilt before Christmas ahead of this year’s Yuletide.

“I want to assure that the churches will be rebuilt before December, so that the people can celebrate the Christmas in a more conducive atmosphere.

“We will also make sure that all private houses destroyed are rebuilt without delay”, he said, adding that his action had no political under tone.

“We are not doing this for political reasons because we are not facing any election now. Our actions are based on the desire to serve people and to ensure equity among them”.

He visited the Emir of Uba, Ali Mamza, and the Emir of Askira, Abdullahi Askirama, where he pledged to rebuild the Askira-Uba Local Government Area secretariat and other structures damaged by the insurgents.

Mr. Shettima was also in Gwoza, headquarters of Gwoza Local Government Area where he promised to rebuild the palace of the Emir of Gwoza, Muhammad Timta.

“The Emir of Gwoza wants to return home but for his palace, which is badly damaged. We will rebuild the palace in the next one month so he can come back”, he said when he addressed elders of Gwoza in front of the damaged palace.

Mr. Shettima also visited Pulka, where he addressed hundreds of residents who had returned home, and promised to tackle the problem of water shortages facing the people.

“I want to pledge here that we are going to take immediate action to tackle the problem of water shortage facing the people. We shall put in place the necessarily mechanism to address the problem immediately I return back to Maiduguri”.

He lauded the military for liberating the area from Boko Haram insurgents, and promised enhanced welfare for the people.

“We have to commend the gallantry of the military in ensuring that peace return to our communities.

“We must continue to support them to ensure that the peace is maintained, people should give them 100 percent cooperation and report strange happenings to them”, he said.

Mr. Shettima distributed food items worth millions of Naira to the people before proceeding to the next community. (NAN)