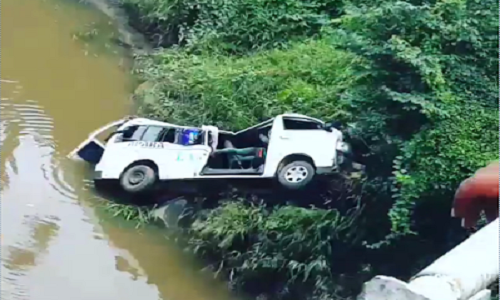 The Mazda bus, with registration number Epe 197 XG, was said to have begun its journey from Sango and was heading towards Atan-Idiroko when the driver lost control of the vehicle about a kilometre from Covenant University, Otta at10.45 am.

Sixteen passengers of the bus died while four others suffered injuries and were taken to a nearby hospital.

It was learnt that local divers helped to coordinate early rescue operations before the arrival of first responders on the scene, which included officials of the Nigeria Police and Federal Road Safety Corps.

Among those rescued by local divers, according to an eyewitness, were a woman and her daughter.

Another victim, who simply identified himself as Taofeek, was also seen at the scene with bruises on his face.

Confirming the accident, the Head of Operations, Ota Unit of FRSC, Mr. Tunde Odunmbaku, blamed the tragedy on excessive speeding by the driver.

According to him, “There were 20 passengers onboard. Eight of them were male while the remaining 12 were female. The accident happened about 10.45 am due to excessive speeding on the part of the driver”.

Bodies of the deceased have been deposited in the morgue.