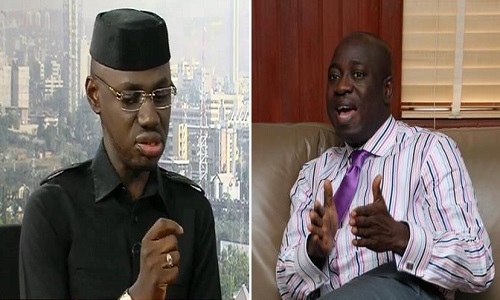 A fresh crisis may soon hit the governing All Progressives Congress (APC) following its decision to appoint a former Minister of Sports, Bolaji Abdullahi, as its spokesman.

Mr. Abdullahi, who was one of the shining lights under the immediate past Goodluck Jonathan administration and a loyalist of Senate President Bukola Saraki, reportedly received his letter of appointment to assume work on his new role in the APC as Director of Publicity.

The position of National Publicity Secretary of APC became vacant about a year ago following the appointment of Lai Mohammed as Minister of Information and Culture.

However, a legal hurdle may be placed on the path of the APC by its Deputy National Publicity Secretary, Comrade Timi Frank, who has threatened legal actions against the party, should it go ahead to appoint the former minister as spokesman.

Although, a meeting of the party’s National Working Committee (NWC) to discuss the issue of Bolaji’s appointment failed to hold yesterday, the former minister was sighted at the party’s national secretariat in Abuja.

Reacting to the issue, Mr. Frank, who has been vocal in his criticism of the national leadership of the APC and believed to have worked to be appointed as the party’s acting spokesman, said the National Chairman of the party, Chief John Odigie-Oyegun, lacked the powers to appoint Abdullahi or any other person for that matter, acting National Publicity Secretary.

He insisted that going by the constitution of the APC, following the elevation of Mr. Mohammed to Minister of Information and Culture, he automatically assumed the position of acting spokesman of the governing party.

“If they don’t follow due process, I will take the party to court. I will have no other option than to go to court to ask if the party, NWC or national chairman has any power to appoint anybody as acting national publicity secretary, or whatever name they want to call it, to speak for the party”, Frank said, adding “As far as I’m concerned, it is not their business”.

“I understand that they might call him any kind of name. He might be appointed by the national chairman or the NWC. I don’t know who will do that. It might take place anytime from now. I want to let you know that I’m still in charge as acting national publicity secretary of this party, whether anybody likes it or not. Nobody, appointed by Oyegun in the name of APC, can speak for the APC”, he insisted.