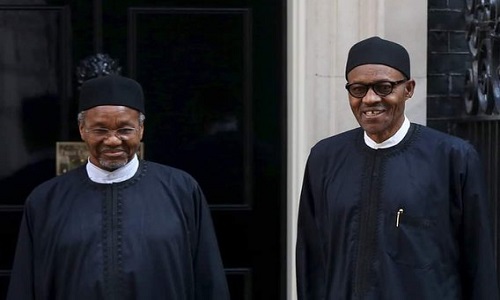 Speculations that Mamman Daura is the unseen hand running the affairs of the country has been dismissed by President Muhammadu Buhari, who is his nephew.

There have been allegations that Daura wields unrivaled influence in the Presidency, so much that no appointment is made without his approval. He has also been labeled the ‘cabal’ that has held the president hostage.

It would be recalled that in a controversial interview with the British Broadcasting Corporation, BBC, earlier this month, wife of the president, Aisha Buhari had alluded to the fact that some persons, who she did not name, were imposing political appointees on the president.

Such appointees, according to her, know little or nothing about the vision of the ruling All Progressives Congress (APC) and are thus frustrating the government.

“The president does not know 45 out of 50, for example, of the people he appointed and I don’t know them either, despite being his wife of 27 years.

“Some people are sitting down in their homes folding their arms only for them to be called to come and head an agency or a ministerial position”, Mrs. Buhari revealed in the interview.

When pressed by her interviewer to identify those imposing appointees on her husband, she merely said: “You will know them if you watch television.

“Some of them don’t even have voters card, and those who made sacrifice have been reduced to nothing and certainly not happy with the way things are going”.

Observers were quick to point out Mrs. Buhari was referring to Mallam Daura.

She was also asked whether the president was in charge of his administration, to which she responded thus: “That is left for the people to decide”.

But these assertions were dismissed by Buhari, who insisted that he remains the country’s only president.

He denied the speculations in an interview on The Osasu Show, an online medium.

Asked by his interviewer whether “Alhaji Mamman Daura is the true president, while he (Buhari) is the unofficial vice-president”, he said: “I don’t know where they get their news from”, in apparent reference to the media.

He added: “I stood for the election. I visited every local government in Nigeria, I travelled by road, by air, and so on, and we had one of the most credible election. So whoever feels he has lost somehow is his own problem, I have no problem”.

Buhari similarly reacted to allegations that the humanitarian aid for children in the Northeast may have been diverted by those in charge of it.

He said, “There is a legal instrument developed for how to ensure equal distribution of funds be it for food items, educational or health infrastructure”.

President Buhari pointed out that it is left for the integrity committee charged with handling the aid to share it appropriately.