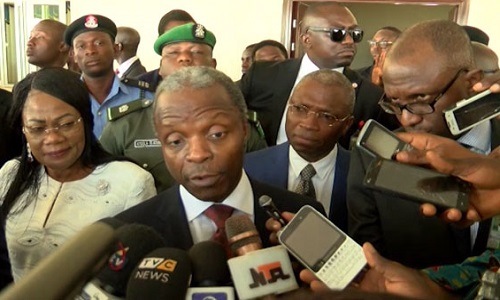 Vice President Yemi Osinbajo (SAN) has said that the present administration will not tele-guide the Economic and Financial Crimes Commission (EFCC) on former President Goodluck Jonathan.

The vice president, who was reacting to a question on whether the former president would be arrested for alleged corruption during his administration, explained that the President Muhammadu Buhari administration was not in the business of arresting just anyone, indiscriminately.

The vice president said all that the present administration “does is to empower security agencies and the anti-corruption agencies to do their jobs without the administration trying to teleguide them”.

It would be recalled that the Lagos State chapter of the All Progressives Congress, APC, had called on the security agencies to pick up former President Jonathan for his stout defence of the former National Security Adviser, Sambo Dasuki, who is standing trial for alleged mismanagement of $2.2billion arms fund.

According to Osinbajo, “corruption is not an ethnic thing, there is an equal representation in the stealing as no one operates with his/her ethnic group alone. The culprits are in every case seen so far, united by greed to steal and not by ethnic or religious interest”.

Mr. Osinbajo, a professor of law, also lamented a situation where as much as $15billion arms purchase fund disappeared from the national coffers into private pockets, saying no responsible government would “wave that aside so as not to offend people”.

On the recent sting operation by the Department of State Services that led to the arrest of some serving judges, the vice president explained that impunity could be very dangerous in any sector and that “the federal government is only exercising its executive function in attempting to check excesses”.

Osinbajo, who spoke during an interactive session in Houston, Texas, with Nigerians living in the United States, added that the important thing was that due process was being followed as the judges were released about 24 hours after their arrest and after they had given their statements.

The vice president attributed the current economic recession in Nigeria to the loss of about 60 percent of government’s revenue due to pipeline vandalism and “endemic corruption” in the system.

He maintained that getting back oil production “is a sure way to get out of the recession and the federal government is working to sort it out”.

He further stated that security agencies had arrested about 800 violent herdsmen across the nation.

“The president has given firm instructions to the security agencies to arrest not only herdsmen who are attacking communities anywhere in the country, but anyone of them or anyone at all in possession of firearms. There are about 800 of suspected violent herdsmen in the country that are currently in custody”, he said.

Vice President Osinbajo, however, lamented that the slow pace of the criminal justice system in the country was stalling prompt trial of the suspects.

“There has always been conflict between herdsmen and communities across the country and people should disabuse the notion that the problem started because President Buhari, a Fulani man, is currently at the helm in the country”, he said.

Osinbajo also hinted that the federal government was working “to introduce community policing that would be in line with the constitution”, saying, “the current situation where police activities are controlled at the federal level has some limitations”.