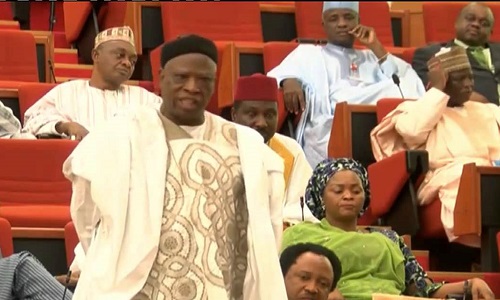 The senator representing Jigawa North West senatorial district on the platform of the All Progressives Congress, APC, Abdullahi Abubakar, has condemned the decision of the National Assembly to amend the Code of Conduct Bureau and Code of Conduct Tribunal Acts.

The House of Representatives had earlier forwarded the draft amendment bill of the CCB and CCT Acts to the Senate for concurrence.

Some of the amendments introduced by the upper legislative chamber to the draft bill forwarded by the House of Reps included the removal of the sole powers to appoint the chairmen of both the CCB and CCT from the President and transfer of same to the Senate.

Section 20 (4) made mandatory the appointment of the chairman and members of the CCT to be subjected to the confirmation of the Senate.

More interesting is the amendment that makes it compulsory for any case of breach or non-compliance to be brought to the notice of the person concerned to enable him/her make a written admission and where such is done, there shall be no reference to the Tribunal.

This particular amendment is one of the grouse Senate President Bukola Saraki has with the CCT, which is trying him over false assets declaration charges while he was governor of Kwara State.

Mr. Saraki, through his legal counsels, argued that he was not notified of any breaches in his assets declaration forms before he was hauled before the Tribunal.

Despite vehement opposition by some senators, the amendment bill was passed.

Condemning the decision of his colleagues as self-serving and anti-people, Senator Abubakar, who said he was away on oversight duties when the amendment was made, stressed that he was completely opposed to the decision.

Speaking Sunday in Birninkudu, the lawmaker said: “Laws are meant to outlive individuals not meant for individuals”.

The Senator also said the current Bill on inheritance before the Senate negates the provisions on freedom of worship, as such would not see the light of the day.

According to him, Christians and Muslims in the country are against the law.

“We are there as representatives of the people and anything that the people don’t want will not scale through”.