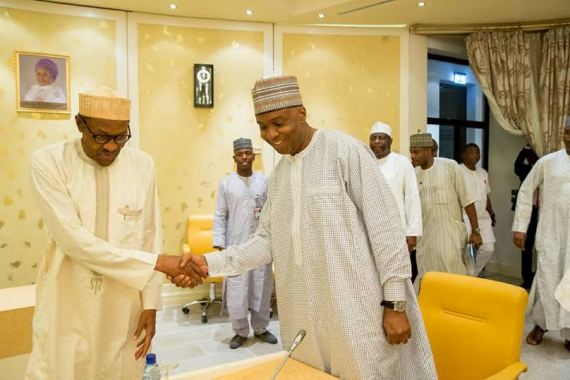 The Minister of Budget and National Planning, Senator Udoma Udo Udoma on Thursday commended the Senate President, Dr. Abubakar Bukola Saraki, for initiating a reform of the nation’s budgeting process.

He said the executive was fully in support of the move.

Udoma, according to a statement by the Chief Press Secretary to the Senate President, Sanni Onogu, disclosed this during the formal presentation of the report of the Technical Committee on the Budget Reform Process in Nigeria, inaugurated by Saraki on July 25, 2016.

“This initiative of Your Excellency, the Senate President, is an initiative that has the full support of the executive”, Udoma said. “We believe that the budget and the budget process is something that we have to work on together closely and collaboratively.

“Consequently, your initiative to look at the reform of the process is an initiative that we welcome and which was why the Director General of the Budget Office, with my authority, participated fully in the deliberations”.

“As the Senate Leader indicated, the success of any budget depends on very close collaboration between the executive and the legislature. I believe that this process that you have embarked on and the reforms will help to smoothen some of the issues that arise from time to time when we are considering the budget”, he said.

In his remarks after receiving the report from the Chairman of the Technical Committee and Leader of the Senate, Senator Ali Ndume, the Senate President described the report as one of the most important exercises of the Senate so far, while commending the Committee for complying with the stipulated time frame for the exercise.

Saraki also commended Mr. Udoma for his participation in the processes that led to the report, saying, “I think as a country, what we are doing today is long overdue for us to have reviewed the budget process. I think we are truly building a solid foundation for the years ahead.

“As we all know, for many years, this has been an area of acrimony and disaffection between the two arms of government which is mainly due to ambiguities in some of the laws and processes”, Saraki pointed out.

“We have public hearings on so many things but the most important law that we have to pass, has very little participation of the public. I am happy it was captured in this report that even when we do the review of the budget, the public should also participate”, he stated.

Earlier, Senator Ndume noted that the low development indicators and lackluster performance of the economy in general are not unconnected with inefficient and ineffective public financial management and budgeting in particular.

He noted that the broad objective of the exercise is to address the pitfalls and challenges in the budget process and significantly improve formulation, enactment, implementation, monitoring and evaluation with a view to improving budget performance and development outcomes.