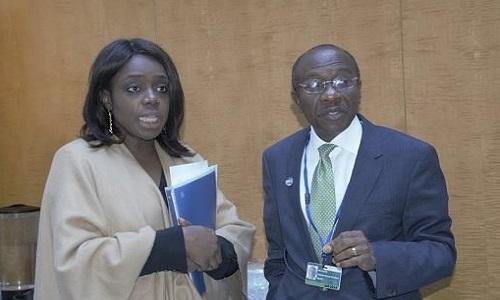 The House of Representatives has urged Nigerians to demand the immediate resignation of Kemi Adeosun, Minister of Finance, and Godwin Emefiele, Central Bank of Nigeria Governor for alleged mismanagement of the country’s economy.

The federal lawmaking body also called for the resignation of the Director General of the Debt Management Office (DMO), Abraham Okonkwo.

The House of Representatives had set up an ad-hoc committee to investigate the N700billion bailout funds given to some state governments by the federal government.

Chairman of the ad-hoc committee, Sadiq Ibrahim (APC/Adamawa), who was outraged over the government officials’ lackadaisical attitude over an invitation to appear before it and explain how the bailout funds was disbursed, said their actions confirm they are the ones behind the mismanagement of the economy, which is in recession.

While Adeosun did not send any representative to the committee’s hearing, Emefiele delegated an executive director in the apex bank, Umar Abubakar, to represent him.

The DG of DMO was represented by Oladele Afolabi. But the lawmakers rejected the representatives.

“The attitudes of these top government officials show who is mismanaging the economy of the country. Nigerians should rise up and call for their resignation immediately”, Rep. Ibrahim said.

“If it is to bring virement, they would rush down, but now that they are to come and explain to Nigerians how the bail-out fund running into over N700bn was disbursed, they are sending representatives; they are only interested in borrowing. This has to stop”, the ad-hoc committee chair roared.

Other members of the committee who spoke at the session lamented the absence of the trio, describing it as unacceptable in view of the quantum of money given out to states as bail-out.

The committee, therefore, directed Adeosun, Emefiele and Abraham to physically appear before it and provide all relevant documents on the bailout funds.