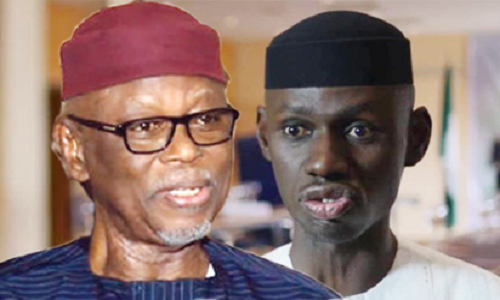 The Deputy National Publicity Secretary of the All Progressives Congress, APC, Timi Frank, has urged President Muhammadu Buhari to appoint the National Chairman of the party, John Odigie-Oyegun, an ambassador.

The appointment, he stressed, would save the governing party from Mr. Odigie-Oyegun’s destructive tendencies.

He also warned that the APC will go into oblivion by 2019 if President Buhari continues to remain aloof to the internal wrangling in the party.

Mr. Frank, who was suspended last Friday by the party’s South-South National Vice Chairman, Prince Hilliard Eta, asked the president not to overlook the recent call by a national leader of the party, Bola Tinubu, that Mr. Odigie-Oyegun should resign from office.

Mr. Frank stated this at a press conference on Sunday in Abuja.

“It is because I love this party, that is why I want it rescued”, he said of his motive. “This party needs help. Otherwise, if this party continues like this, we would suffer in 2019. We can only win 2019 (elections) when we are united, not a divided house”.

“And if the President wants to appreciate the support of Oyegun, the president has so many ways to compensate him. I will appeal to the President if it is possible, to appoint Oyegun as an ambassador, as a former career civil servant, he will do better as an ambassador not as national chairman.

“This is a personal appeal from me to you Mr. President. It is time for you to intervene in the crisis rocking this party”, he pleaded.

Mr. Frank also described his suspension by the South South zone of the party as a “joke”.

“It is not possible to suspend me because the zonal level lacks the mandate”, he said.

Mr. Frank said as a national official, only the National executive Committee, NEC, can suspend him from the party.

A five-man disciplinary committee constituted by the South-South zonal leadership of the APC last Thursday recommended the suspension and subsequent expulsion of Frank.

“I also want to make it very clear to you that I still remain in charge as the acting publicity secretary of the APC”, he asserted.

Mr. Frank also said any attack on him by the leadership of the APC is an attack on all Nigerian youth. He said the APC stands to risk a lot if it goes ahead with its threat to suspend or expel him from its fold.

“APC should learn from the ANC of South Africa on its action on Julius Malema. The party has not remain the same since he was suspended”, he said.

Mr. Frank said he is not just “fighting” for himself but all the young persons in Nigeria.