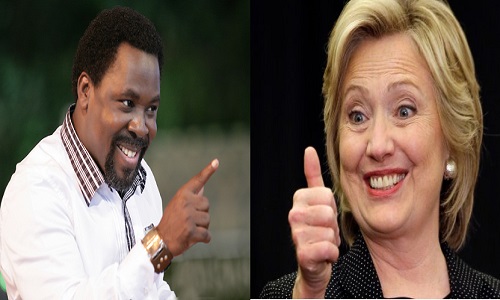 Founder of the Synagogue Church of All Nations, SCOAN, Prophet T.B Joshua, has predicted victory for Hillary Clinton, the Democratic Party Presidential Candidate in the U.S elections scheduled to hold tomorrow, November 8.

The controversial prophet, who predicted that the Democratic Party presidential candidate will have a “narrow” victory over her Republican counterpart, Donald Trump, however, warned of tough times for the next U.S President.

Prophet T.B Joshua gave the prediction during his church sermon on Sunday, his first appearance at the church over the past several weeks.

“By the way, in order not to keep you in suspense, what I frankly saw is a woman”, the clergyman told his congregation.

Mrs. Clinton, a former U.S First Lady and Secretary of State, is locked in a fierce battle with Mr. Trump, a billionaire entrepreneur, for the White House.

With U.S voters ready to go to the polls on Tuesday to elect a new leader, a new NBC News/Wall Street Journal national poll published on Sunday put the Democratic Party candidate narrowly ahead of Trump with 44 percent to the latter’s 40 per cent.

Prophet T.B Joshua is not new to predicting the outcome of elections in other countries as he was last week accused by a popular Ghanaian cleric, Rev. Isaac Owusu-Bempah, of visiting the country to offer spiritual guidance to the incumbent President John Dramani Mahama, to enable him to win the forthcoming presidential election.

The SCOAN founder, however, denied the allegation, stating that at the time he was accused by Rev. Owusu-Bempah of being in Ghana, he was nowhere near that country.