Nigerian striker Victor Anichebe has been mocked by his club Sunderland FC concerning a post he made on Twitter back in October.

The 28-year-old made a gaffe on the social network when after a 1-0 defeat to West Ham, he wrote “Can you tweet something like” before ”Unbelievable support yesterday and great effort by the lads! Hard redult to take! But we go again!”. This proved the post was a copy and paste job. 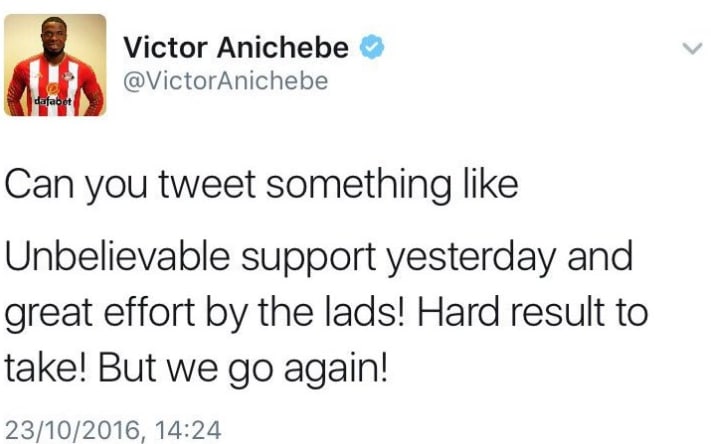 The tweet has since been deleted but the forward’s club isn’t letting him forget it, and it tweeted after the striker’s goal at the Vitality Stadium: ”Can we just tweet something like…@VictorAnichebe makes it 1-1”

Anichebe then added more spice to the humour by trolling himself. He later posted: ”“Can you put something like!” What a result!!! Strong character from the team, and the fans were amazing!!”

The Super Eagles is currently on a season-long loan with the Black Cats from West Brom.

He is yet to play for Nigeria since his last appearance in a 2-0 win over Madagascar in 2011.

He told BBC Sport in 2013 that he does not want to be considered for Nigeria and wants to focus on club football instead.  However, he stated that he will return to international football in the future.

He has played 16 times for his country, scoring 3 times.