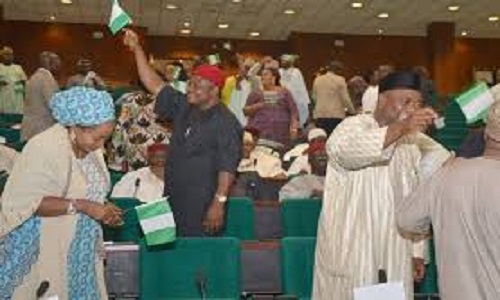 The House of Representatives on Thursday set up an ad hoc committee to investigate alleged under-payments made by telecommunications service providers to the Federal Government.

The resolution emanated from a motion on the need to address the massive loss incurred by the Federal Government due to the activities of the telecommunication service providers.

The committee is to report back to the House within four weeks for further legislative action.

Moving the motion, Rep. Yusuf Tajudeen said that Nigeria recorded colossal lose of revenues from the service providers, who consistently took advantage of regulatory loopholes to underpay the government.

According to him, considering the volume, values and traffic on each of the service providers, the revenues generated by Nigeria through operating levy, as well as income tax on proﬁt paid by the ﬁrms have been grossly inadequate.

Tajudeen expressed worry that the Federal Government receives only revenues based on what is declared by the telecom operators through their self-assessment and self-declaration mechanisms usually skewed in their favour.

He said that the Nigerian Communications Commission does not carry out appropriate veriﬁcation of the volume of transactions done by these telecom providers.

“Sometime in April 2015, without the approval of the NCC, the telecom service providers unilaterally increased the termination fee for inbound international traffic into their networks to N10 per minute from N3. 90k.

“This led to increased revenues for these ﬁrms without corresponding increase in revenues accruable to the Federal Government.

“Unlike some neighbouring countries, Nigeria does not have a well-structured platform to duly verify the transactions and declarations made by telecom service providers with a view to correcting the anomalies in revenues remitted to the Federal Government,’’ he said.

Tajudeen further said that due to the absence of effective monitoring mechanism, Nigeria had lost humongous revenues because the huge traffic brought in at higher termination fee was usually credited as local calls.

“And the service providers pay the Federal Government same rate as the rates from local calls.

“Service providers take advantage of the non-uniformity of data computed by the NCC and the National Bureau of Statistics in terms of inbound termination calls into Nigeria by paying the Federal Government whatever suits them.

“Despite its size, population and traffic of international calls, revenues paid to the Federal Government is abysmally low when compared with other countries.

“Ghana with the implementation of International Inbound Traffic Regulation, generated about $ 143million as additional revenue between June 2010 and June 2012,’’ the lawmaker said.