Home News Feed Pregnant Woman, Others Affected as Bus Swerves from Road and Plunges Into...
Facebook
Twitter
WhatsApp
A bus which left the road and flew straight into an abandoned bridge has caused irreparable damages to lives and properties. 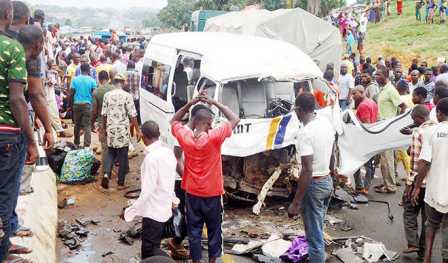 An 18-seater commercial bus has plunged into an abandoned bridge in the Alagbole area of Ogun state leaving behind casualties.
According to Punch Metro, three persons died while 14 others, including a pregnant woman, were injured in the crash which happened around 1pm on Thursday.
Eight of the victims were  said to have been rushed to the Ifako-Ijaiye General Hospital.
However, two of those in critical condition – a driver and a passenger – reportedly died while being taken to the Gbagada General Hospital, while another victim admitted in a private hospital was said to have given up the ghost.
It was gathered that the bus, with number plate, AGL 725 XG, had taken off from Akute, a neighbouring community, and was heading for Ojodu-Berger, Lagos State.
The driver was said to have noticed that the brake was faulty and stopped a few meters away from the bridge to fix it.
It was gathered was told that as the driver made to continue the journey, a woman expressed her doubt on the effectiveness of the brake and disembarked. No sooner had the vehicle left the bus stop than it crashed into the bridge.
An okada (motorcycle) rider, Bolu Aremu, said the pregnant woman sat by the door and jumped from the bus before it crashed into the bridge.
He said, “The driver thought the brake was in good condition after repairing it. The moment he took off from the bus stop, the vehicle raced uncontrollably downward the bridge. Except the woman that alighted, he and other passengers were injured. An elderly man broke his leg.
“They were trapped in the vehicle. Emergency workers had to cut through the iron seats to rescue them. One person died in one of the hospitals the victims were rushed to. A man bled from the eyes.”
Another eyewitness, Dada Akande, told Punch Metro that the impact of the crash forced the scalp of driver open, adding that some of the victims were rushed to Abiola Hospital, a private hospital in the area.
The hospital’s gate was shut when our correspondent visited the place.
“Although the accident should be blamed on the driver’s recklessness, the Ogun State Government needs to get contractors back to finish this bridge on time. The road leading to the bridge is steep, which aids accidents.
“Several vehicles have crashed into the bridge between January and now. If the bridge is completed on time, it will go a long way in reducing the crashes,” a resident, Ibrahim Tijani, said.
A worker at the Ifako-Ijaiye General Hospital, who did not want to be named, said the victims were unconscious when they were brought into the hospital.
“We were able to resuscitate all of them. Three were referred to the Lagos State University Teaching Hospital because they had head injuries. Three went to the Gbagada General Hospital because they had multiple fractures.  Two out of those that had head injuries died on the way to LASUTH and they had been transferred to the morgue,” the official said.
The Area Commander, Ogun State Traffic Compliance and Enforcement Corps, Akute Division, Ami Ganiyu, urged motorists to always ensure that their vehicles were in good condition before embarking on any journey.
“We received a distress call at about 12.50pm that a bus with 10 occupants was involved in a lone accident at the Alagbole bridge. The victims were taken to different hospitals and one of them is presumed dead,” he added.