Almost everybody knows something about Queen Elizabeth II.  We’re familiar with her pastel suits, great hats, and her mastery of the very distinct “royal wave”.  We know from a great deal of news coverage that she has reigned over the Commonwealth Realms for more than 60 years, which is the second-longest reign in British history.  We also know that despite the Queen’s long reign and a lengthy marriage to Prince Philip, her hubby is still and always will be just a prince (and the Duke of Edinburgh).  Another thing we’re certain of is that Her Majesty loves her corgis.

Besides these rather superficial facts, many of us don’t know much more about the Queen.  She rarely gives interviews and has not written any books, unlike her son Prince Charles.  Because of this, little information is available about her personal life.  What are available, if you delve a little deeper, are some strange and interesting facts about this elusive character which give some slight indication as to what it’s like to be a reigning monarch.

With her 88th birthday coming up just in a few weeks, here are some of the odder facts available about Her Majesty Queen Elizabeth II. 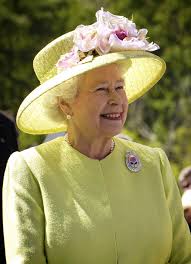 10.  She gets two birthdays

Given the meaning of the day, every individual having one birthday per year makes sense.  Even so, a lot of people stretch it out to mean a full weekend or even a week of festivities, but how about celebrating it twice per year, every year? Not even during the same week, but perhaps even months apart. This is how things work for the Queen, and actually any other reigning monarch of England.  Because England has so few nice sunny days, the monarchy decided that ‘official’ birthday celebrations be held during the summer when the weather is more likely to be pleasant.  Though having two birthdays sounds a little extreme, it makes sense given there is a birthday parade and various gun salutes in parks around London.  If the weather is good, it makes for a more agreeable day for everyone involved.  This is why they choose a Saturday in June for the Queen’s official birthday celebrations, rather than the date of her actual birthday, which is April 21.  On this (likely rainy) day, she celebrates in private with her family.

9.  She has owned more than 30 corgis during her reign

Most people own one beloved dog during their childhood and maybe one or two dogs as an adult, if any at all.  The Queen has owned more than 30 dogs during her reign, often owning more than one at a time.  Her first corgi as Queen was a gift for her 18th birthday and its name was Susan.  Because the royal family breeds dogs, many of the Queen’s subsequent corgis are descendants of Susan.  The Queen owns five corgis currently; Emma, Linnet, Monty, Holly and Willow; along with four “dorgis” named Cider, Berry, Candy and Vulcan.  The “dorgi” is in fact a breed that was developed by the royals themselves, mating one of the Queen’s corgis with Princess Margaret’s dachshund.

8. A footman was once demoted for getting her corgis tipsy

Given the fact that the corgis have been known to wear rubber boots to protect their feet from gravel at the palace, it’s a little surprising that the footman wasn’t fired, but a newspaper claims he was only demoted.  Regardless, the story goes that this footman used to regularly spike the corgis water with whiskey and gin (very English) in order to amuse the other employees while the Queen was away.  He was discovered when one of the older corgis eventually died and a post-mortem examination was done.  The veterinarian who performed the examination found traces of alcohol in its blood and brought the information forward.  The palace has never commented on how exactly the naughty footman was reprimanded. 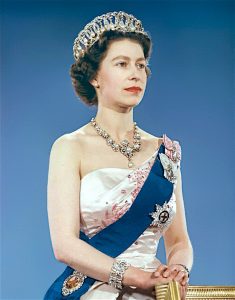 In 1937, at the age of 10 or 11, Elizabeth II became a Girl Guide along with Princess Margaret who became a Brownie.  They were members of the 1st Buckingham Palace Unit along with a few other girls, and changed units a few times during the war.  Elizabeth II served as a Patrol Leader and even a Sea Ranger, which involved taking the Queen Mother out in a dinghy.  Eventually she became Chief Ranger of the British Empire and now that she is Queen she is their official patron, with the Countess of Wessex serving as the group’s president.

6.  She doesn’t have a passport or a license, nor does she require a license plate for her vehicle

Though Elizabeth II has visited a vast number of countries, she doesn’t require a passport – because, of course, British passports are issued by none other than Her Majesty herself.  She doesn’t require a licence or licence plate for similar reasons.  You also might expect that she never drives and would only be taken from place to place by her chauffeur.  This is mostly true; however she has been known to take the occasional cruise around the royal grounds in one of her many vehicles, usually a Range Rover.
5.  She has Facebook
Her Majesty does not have her own personal page where you could friend or poke her, but there is an official community page for the British Monarchy.  They have more than 1.1 million likes and post very frequently, often several times per day.  Posts range from facts about historic landmarks to photos of baby Prince George.

4.  She was the first head of state to send an email

In 1976, before most of us were aware that email was coming into existence and even before the invention of the modern day internet, Her Majesty sent her first email.  It was sent over ARPANET, a precursor to today’s internet, and was sent from a research facility used by the army.  No other details about the contents of the email or who it was sent to have been released. It’s a safe bet the email was pretty thin on ‘LULZ’ and smileys, though.

3.  She has survived a shooting and a stalker

On June 13, 1981, the Queen was celebrating her official birthday when shots were fired during the parade as she rode on her horse.  Fortunately, the shots were blanks and her horse didn’t spook too much, and so she settled her horse and continued riding.  The shots were fired by a teenager who was enthralled by the assassinations of John Lennon and JFK.  The teenager spent several years in a psychiatric prison following the incident.

Perhaps even more shocking, a man named Michael Fagan broke into the castle not once but twice in 1982.  The first time, he got in through a maid’s window, startling the maid, but when she ran for help and others investigated, no one believed her.  Meanwhile, the intruder was wandering the corridors of the palace and drinking Prince Charles’s wine.  Because Fagan was unsure of where he was going and soon tired, he left.  He returned several weeks later and this time when he crawled through a window, it was into the Queen’s bedroom.  He woke her and she summoned for help immediately, resulting in an unarmed footman coming to her aid and dealing with Fagan, who was arrested soon after.

2.  She has raced pigeons

This is probably one of the more absurd things on the list as many people are not aware that it’s even possible to race pigeons.  Apparently, not only is it possible and the Queen participates, but there is in fact a long history of pigeon racing among the royals.  The tradition was started in 1886 when King Leopold II of Belgium presented racing pigeons as a gift to the British Royal Family.  The sport has continued and Queen Elizabeth II is a patron of several pigeon racing clubs.

1.  She was a driver and mechanic in the army during WWII

This might explain the Queen’s joyriding around the castle grounds from time to time.  After begging her father to participate in the army during the Second World War, he finally conceded, allowing her to train as a mechanic and military truck driver.  At the age of 18 she was in the Women’s Auxiliary Territorial Service and was known as Second Subaltern Elizabeth Windsor.  Apparently Her Majesty performed quite well and is still the only female royal to have entered the army.  She is also the only remaining head of state who served in WWII.