An official statement has been released by Atletico Madrid saying that the club’s striker Fernando Torres is “stable, conscious and lucid” in hospital after suffering a head injury in the 1-1 draw with Deportivo.

The ex-Liverpool and Chelsea striker fell heavily in an 85th-minute aerial challenge with Alex Bergantinos.

The Spain international will have more tests on Friday, but Atletico confirmed scans showed he has “no traumatic alterations or injuries”.

Torres has also spoken after the incident, he said: “It was just a scare. I hope to come back very soon.”

Players from both teams immediately rushed to Torres and called for medical help.

He was assisted for several minutes by doctors before being taken off on a stretcher and transferred to a hospital.

Speaking at his post-match news conference, Atletico coach Diego Simeone said he was “worried and nervous” when the incident happened.

“We heard the blow from the bench, we saw how he fell and we were afraid,” he said. “We didn’t know if that noise was Fernando’s neck or not.”

Atletico finished the game with 10 men, having used all three substitutes, but earned a point thanks to Antoine Griezmann’s stunning 30-yard strike.

Deportivo had taken an early lead in Pepe Mel’s first game in charge when Florin Andone capitalised on a poor Jan Oblak goal-kick.

“Everybody was speechless in the dressing room because of what happened,” said Griezmann.

“In the end I do not care about the result. I just want to know what’s up with Fernando and hopefully he’s fine. And he gets back to us soon.”

Atletico left-back Filipe Luis added: “It’s very ugly to see it, we were all scared but at least the news we have received so far is good and the most important thing is that Fernando is well.” 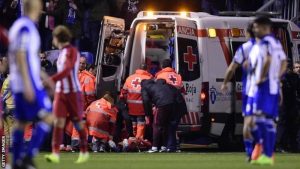