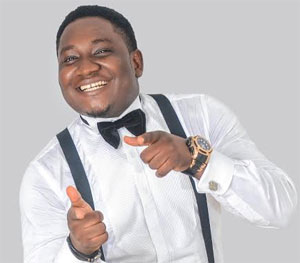 Away from being a laugh merchant, celebrated comedian and On Air Personality, Emeka Erem, aka Ajebo will be touring Nigerian campuses with his comedy and music concert, Ajebo Unleashed. However, the comedian revealed that this time around, he is taking with him a message of hope and inspiration.

Sponsored by Minimie Chinchin in partnership with Wow Production, his production outfit, the comedian, who is popular on YouTube for his animation series, House of Ajebo revealed that the aim is to give back to students in campuses. “We are going with two hash tags. One of is #DontDoDrugs. No matter how much it has been said, we will not stop talking about it. Drugs kill. As an entertainer, I can stand here today to tell you that I didn’t need to take any performance enhancing drug to perform on stage,” he said.

According to him, the second hash tag, #SurviveOnCreativity is geared towards letting Nigerian youths know that their future is in their hands. The idea, he said, is to urge them to survive on their God given talents by building an entrepreneurial mindset even while on campus. “So we are trying to also push the message of entrepreneurship. We cannot protest, we cannot fight, we cannot take up arms. What we have is entertainment and that is what we are using to talk to the youths of this country,” he said.

In addition to all that, Ajebo revealed that he will also be giving out a cash gift of N100,000 to one lucky person. “All they have to do is to shoot a one minute video of how they break the boredom on campus and tag his Instagram handle, @ajebodcomedian using the hashtag, #minimiechichinbreaktheboredomchallenge. Also on campuses, we will be giving out cash prizes to three lucky people in an open mic session at the show,” he added.

The campus tour is set to kick off at the University of Abuja on March 8. On the 10th, it will berth at the Nasarawa State University while also stopping over at Babcock University on March 12, UNILAG on March 15, Lead City March on March 24 and UNIBEN on the 6th of April. Among comedians who will be following him on the tour are Seyi Law, Akpororo, Elenu, Acapella, Pencil, Kenny Blaq, MC Shakara, Kilnt de Drunk, Osama, Ambassador Wahala, Chucks de General and others while the likes MI, Skales, MCGalaxy, Reekado Banks will be providing music.