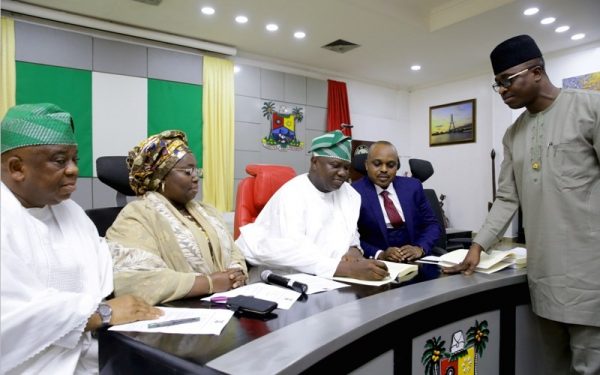 Two weeks after it was signed into law by Governor Akinwunmi Ambode, the Lagos State’s law on the environment is still inaccessible to the public, PREMIUM TIMES can report.

The law titled: Consolidated Laws on the Management, Protection and Sustainable Development on the Environment in Lagos State and Connected Purposes, was signed by Mr. Ambode on March 1 after a contentious public hearing organised by the Lagos House Committee on the Environment on February 9 and its subsequent passage by the House on February 20.

Last week, Tunde Braimoh, a member of the Lagos State House of Assembly, told PREMIUM TIMES the clean copy of the new law was with the Executive arm.

“It’s an executive thing, after they sign it they will send it to the Printing Corporation for printing, I don’t know how far they have gone about that,” said Mr. Braimoh (APC, Kosofe II), Chairman, House Committee on Information, Strategy, and Security. Others are Africa Women Water, Sanitation and Hygiene Network (AWWASHNET)

“If you go to Ministry of Justice, they will have it, because they are the people that will send it to the (Corporation).

“What I have is the one that was worked on but if you want to get the gazetted one, you have to go to the Ministry of Justice.”

At the Ministry of Justice, last week, an official said the gazetted law could be available after one week.

However, the official said the document isn’t yet ready.

Environmental activists in Lagos say they could also not access the new law.

The groups insisted that the inaccessibility of the document from the relevant ministries of the Lagos State government two weeks after it was signed has fuelled suspicion that its provisions are anti-people as they had alerted immediately the Lagos House of Assembly passed it.

During the public hearing, civil society groups had faulted the process on the premise that the 190-page draft bill was only made available to the invitees a day before the legislative exercise.

In addition, a few civil society organisations were invited and allowed to present memorandum.

In a statement issued by the groups in Lagos, they faulted sections of the law which they describe as “corporate buy-over of Lagos” in the guise of providing services.

The groups that signed the statement include: Environmental Rights Action/Friends of the Earth Nigeria (ERA/FoEN), Peace and Development Project (PEDEP), Joint Action Front (JAF), Friends of the Environment, Climate-aid, and Committee for Defence of Human Rights, the Justice Development and Peace Commission (JDPC) of the Catholic Church andOthers Africa Women Water, Sanitation and Hygiene Network (AWWASHNET).

Akinbode Oluwafemi, Deputy Executive Director of ERA/FoEN, said the haste with which lawmakers organised the public hearing and passed the bill, and the equal speed with which the governor assented to the document is questionable in the face of a near total lack of public input.

“We are shocked that more than two weeks after the governor signed a law as far-reaching as the new environment law, no one has set eyes on the document or can say what it contains outside what we saw as a draft by the House of Assembly,” Mr. Oluwafemi said.

“We have suddenly realised that the greatest threat to our people is when a supposed-democratic government now exists only for big business. We are miffed.”

Francis Abayomi, Executive Director of PEDEP, described the alleged secrecy surrounding Mr. Ambode’s assent to the law as controversial and antithetical to the citizens of Lagos as “very disturbing.”

“We are particularly worried that the governor will sign a law that practically wills our right to a free gift of nature which water represents; to private interests whose sole concern is profits. Personally I am shell-shocked,” he said.

Veronica Nwanya, chairperson of AWWASHNET, said access to water is a human right that cannot be taken away from the people.

“This law, not only violates that right,” she said. “If allowed unchallenged, it will add to the burden that lack of sustained investment in the water sector has unleashed, and worsen the poverty the people suffer. Women and children and even generations yet born will suffer. It is unacceptable.”

The bill passed by the state House of Assembly on February 20 was not made public.

However, the draft at the Public Hearing gave too much power to the Lagos Commissioner for Environment, criminalizes sinking of boreholes, and imposes fines and sets prison terms for any Lagos citizen that sells or transports water, among others.

Mr. Braimoh had told PREMIUM TIMES in February that the sections of the bill that criminalised sinking of boreholes in residential areas were removed from the one passed into law.

But the activists called on Mr. Ambode to end the regime of speculations on the law by making it public without further delay.