The Governor of Ogun State , Senator Ibikunle Amosun, on Monday, has signed a bill to upgrade the state-owned Moshood Abiola Polytechnic, Abeokuta, to the Moshood Abiola University of Science and Technology, Abeokuta. 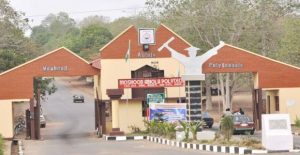 Also signed into law is the bill to establish the Ogun State Polytechnic, Ipokia, in the Yewa area of the state.

Amosun signed the bills during the State Executive Council meeting at the governor’s office in Abeokuta.

He said the MKO University, which would operate a multi-campus system, was expected to boost science and technology in the state.

The News Agency of Nigeria reports that this is the highest honour bestowed on the late MKO Abiola, the presumed winner of the June 12, 1993 presidential poll, rated worldwide as one of the freest and best elections in the history of the country.

The administration of the late Head of State, Gen. Sani Abacha, had arrested and detained Abiola for declaring himself president following the annulment of the election by military dictator, Gen. Ibrahim Babangida.

Ogun had named the state polytechnic and the state stadium in Abeokuta after the late Abiola.

Amosun commended the state House of Assembly for the speedy passage of the bill.

In an interview with newsmen after the occasion, the Speaker, Mr. Suraj Adekunbi, said the House gave the bill accelerated passage because of the priority the government accorded education.

He noted that the establishment of the two institutions would create more jobs in the state.

NAN reports that the House had, on January 31, passed the MKO Abiola University Bill and the Ogun State Polytechnic, Ipokia, Bill.