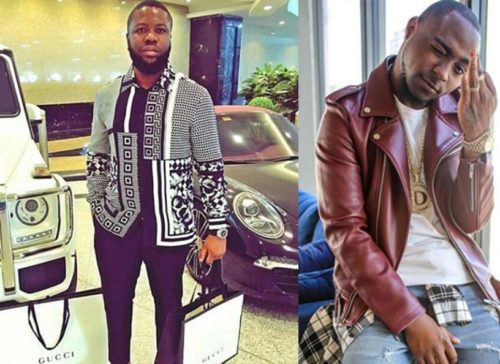 Hip-hop star, Davido have made up with Malaysia-based Nigerian ‘Big Boy’, Raymond Hushpuppi after a brief battle of wealth supremacy.

The fight began when Hushpuppi spent N11m at the Quillox Club and dared anyone to match his spending. He had also said he was a rich man and not a rich man’s kid like Davido.

Davido had lashed out at the Malaysian big-spender telling him to go and buy a land instead of being wasteful. He had also posted a photo of his December account balance to show he was richer than Hushpuppi.

While some twitter users claim that Hushpuppi got his money through questionable means, his supporters rubbished the claims, saying he is genuinely rich.

However, few hours after the fight, the duo reconciled with a video of them hugging each other uploaded on social media.