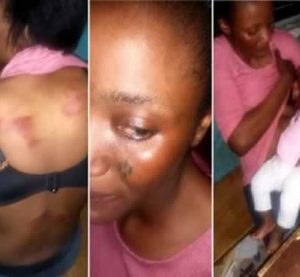 Mr. Abdullahi Chafe, the Ekiti state police commissioner said the woman who was beaten by policemen at a checkpoint  in Ado Ekiti slapped one of his men and tore his uniform.

Chafe spoke in a reaction to the social media outrage against the policemen for brutalising a woman.

Her face and back show scars from the manhandling by the policemen.

After the beating, she and her baby, including her younger brother, Adeniyi Dada were detained at a police station in Ado Ekiti, the Ekiti. The Kia Picanto   that Dada was driving was also impounded.

State police Commissioner, Mr  Abdullahi Chafe said the woman, who was said to have recently returned from America where she delivered her baby committed an  offence at a checkpoint when she was  asked to prove the ownership of the car in which she was being driven.

“Those people slapped my policeman on duty and tore his uniform. Uniform is an authority and what those people did was against the law and it is not good for a civilian to slap a policeman

“It is not good for somebody to prevent a law enforcement officer from carrying out his lawful duty, somebody wearing the uniform? It is not about his age but the authority he carries, i don’t allow my men to do something contrary to the law

“I don’t want a woman to be detained with baby or with pregnancy. I don’t want an old woman or a minor to be detained. I have taken note of this and we will take the right action on the matter as investigation continues,” he said.

The husband of the woman, Mr Akanni Adeyeye refuted the police claim, saying his wife and her brother were  beaten up and detained for refusing to offer bribe to the policemen at the checkpoint.

He told newsmen that about five policemen on duty at the checkpoint beat them up before taking them to the New Iyin Police Station where they are being detained.

He claimed that the policemen requested for vehicle particulars and driver’s licence of his brother-in-law who drove the car and found them to be up to date.

He said the refusal of his wife to offer them bribe led to her being beaten-up.

He said the beating  was severe to the extent that there are wounds on the back and face of his wife.

Adeyeye  said he was shocked to discover that  the police gave a different version of the incident that  his wife narrated to him.

He believed that the policemen cooked up the story that his wife slapped one of them and tore his uniform.

But the Commissioner of Police insisted that the woman was detained for allegedly slapping one of the policemen on duty and tearing his uniform.