The Director Defence Information (DDI), Major-Gen. John Eneche, says that the military has failed to capture the leader of Boko Haram sect, 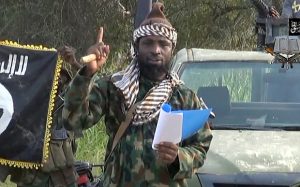 Abubakar Shekau because there have been so many faces of the leader.

Eneche said the military is working towards capturing the real Shekau. The Defence spokesperson said this at a press conference in Abuja.

“There were so many Shekau faces. That was what was responsible for that. But we will get the real thing. We have now come to know that the real Shekau is yet to be apprehended. So, that is the truth. When Osama Bin Ladin was killed, they went further to do a DNA test.
That was what happened. The truth is because of so many faces of Shekau that came up, that was what brought about the mix up. But it is true the real Shekau is yet to be apprehended, and we will get him.” he said
Source: ( Linda Ikeji )