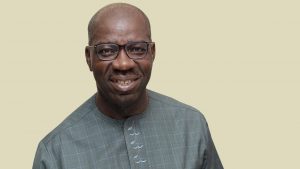 Governor of Edo State, Godwin Obaseki, has indicated interest to participate in the 2017 Okpekpe International 10km Road Race slated for May 13 in Okpekpe, Etsako East Local Government Area of the state.

Obaseki, who spoke at a press briefing to mark the commencement of activities for the annual event at the Government House in Benin on Friday, however, said that he would run to raise funds for charity, under “We Care Trust,” a pet project of the wife of the immediate past Governor, Iara Oshiomhole.

He noted that the event, which was in its fifth edition and came about as an “infrastructure accident,” had come to stay.

He explained, “For us, Edo State Government, we are very proud to be associated with this international event, which even though came about as an infrastructure accident, after which I constructed this very beautiful road to the scenic town of Okpekpe.

“We then looked around for what we could do to the road, in addition to moving our citizens to this lovely town. And with the ingenuity of the founder, Mike Itemuagbor, we were able to get the interest of the international athletics association to buy into our dream to create a 10km Okpekpe road race‎, which is one of the very few road races recognised by the (athletics) federation globally.”

Obaseki commended the facilitators for introducing new innovations to the race in order to make it at par with international standard.

He also said that the state government was willing to partner with the international media in identifying young talents through sports.

The governor said, “One of the most interesting aspects of this race and one aspect I am very proud of is the quality of the partners – the technical and media partners and everybody else who has ‎been part of the success story.

“We are very‎ pleased with the new innovation by Super Sports, Let’s Play, and we hope we can collaborate with you as part of our promoting school sports to encourage kids in the captive areas around Okpekpe, Auchi, Iyamho, where we have a new pitch, and Okpella.”

“We hope to be able to carry this event around those areas to encourage kids to take active interest in sports,” he added.

Earlier, the organiser of the race, Pamodzi Sports Marketing, disclosed that a former Governor of the state, Adams Oshiomhole, would be honoured as a grand patron of the road race for his contributions to the annual event.

The Director of Organisation of the race, Mr Zakari Amodu, also said that about 11 countries, including Kenya, Morocco, Tanzania, Eritrea, Ethiopia, Burundi, Bahrain and Uganda, would participate in this year’s edition.