No fewer than 165 Nigerians on Thursday voluntarily returned back to Nigeria from Libya with the help of the International Organisation for Migration, a United Nations’ body. 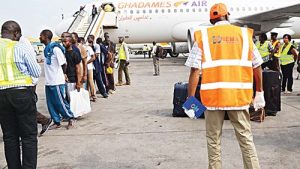 They arrived at the cargo area of the Murtala Muhammed International Airport, Lagos at about 5.10pm, aboard a NOUVELAIR aircraft with registration number TS-INA.

The Director General of NEMA, Mr. Mustapha Maihajja, said majority of the returnees were from Edo State.

Maihajja, who was represented by NEMA Zonal Coordinator, South-West, Mr. Yakubu Suleiman, said the returnees would be assisted to get home.

He said parents should caution their children about the dangers of going outside the country to seek greener pastures.

He said, “Our advice is for youths to remain in the country and work hard. With the current Federal Government’s initiative towards job creation, they will be gainfully employed.

“Most of them are from Edo State, they can take advantage of the state government’s target towards job creation to make their lives better rather than going to where they feel the grass is greener.”