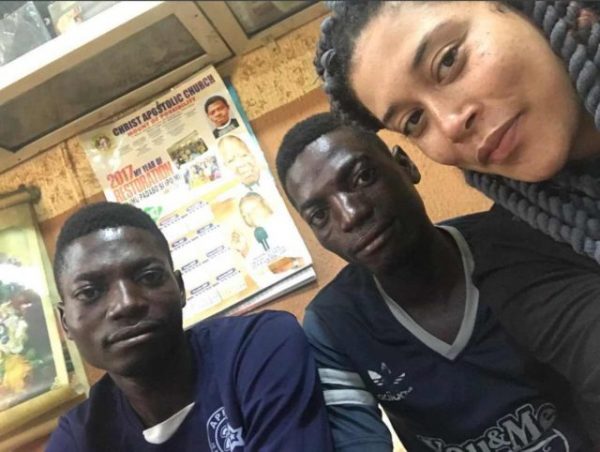 Celebrity actress and mother of two, Adunni Ade, in an Instagram update on two weeks ago shared the story – after much reservations – of some twin boys she’d met three years ago who hustled the streets wiping car windows in exchange for money.

An excerpt from her update read: “I stopped allowing them to wipe windows pretty much from the onset and would give what I can. Last week, I playfully informed them it was my birthday. As they both saw me yesterday, they ran to their shed monitoring my car so I don’t drive off, and boom, Taiwo holds a black nylon bag and presented this gift to me.”

Also, on her Instagram page, she shared a picture of her holding up the gift – a Bible –  and Taiwo, one of the twins all smiles. In her update, she says:

“I have told them to stop this hustle and asked what they will like to do. They both said starting up a small business selling items. My dream and wish is to get them off the street. Yes, I should have done this a while ago, but then ago,  it ain’t never too late.”

She did not ask for donations but a week later, she shared on her page how she took the twins to her dad for a second opinion and got more.  Joyfully she announced that the twins have now settled in; Taiwo as a barber and Kehinde as an engineer who works on car batteries.