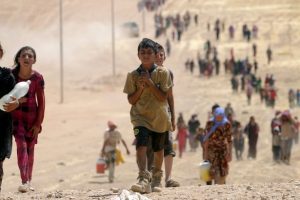 The Mirror reports that evil ISIS thugs cooked the baby boy of a Yazidi woman and then fed him to his unsuspecting mother after almost starving her to death.

The woman was allegedly being kept as a sex slave in a dark cellar and hadn’t eaten for three days.

The Mirror quoted Iraqi MP Vian Dakhil, as saying that a ten-year-old girl was also ‘raped to death’ in front of her family members.

A tearful Ms Dakhil was speaking to Egyptian TV channel Extra News when she revealed the horrific persecution endured by her people.

Ms Dakhil told interviewers: “One of the women we managed to retrieve from ISIS said that she was held in a cellar for three days without food or water.

“Afterwards, they brought her a plate of rice and meat, she ate the food because she was very hungry.

“When she was finished, they said to her: ‘We cooked your one-year-old son that we took from you, and this is what you just ate’.”

Ms Dakhil is the only Yazidi in the Iraqi Parliament.

She begged for international help when the Yazidi community was trapped on Sinjar Mountain in 2014 amid an ISIS onslaught.

ISIS believe they are entitled to rape, abuse, torture and murder Yazidi women after they declared them ‘devil worshippers’.

Ancient faith of Yazidism integrates some Islamic beliefs with elements of Zoroastrianism, the ancient Persian religion and Mithraism.

Yazidi women and children are expecting to convert to Islam if captured by ISIS, and are then sold as brides.

But those who refuse to convert are eventually murdered.

Ms Dakhil also told the news channel that a young girl was raped to death in front of her father and five sisters after they were taken captive.