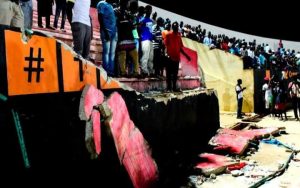 It was a bitter experience for the World of Football as Eight people were killed during Senegal’s football league cup final in Dakar on Saturday, the sports minister told AFP, as a wall collapsed onto clashing supporters triggering a panicked stamped.

The tragedy occurred during the match between USO and Stade de Mbour at the Demba Diop stadium in Dakar. Sports minister Matar Ba said a young girl was among the dead, while around 60 injured fans had been taken to health facilities in Dakar.

At 2-1 during extra time, US Ouakam supporters began throwing stones at Stade de Mbour fans, causing spectators to begin vacating their seats in a rush, the journalist said.

Part of a wall supporting bleachers seating fans from both sides then collapsed, while police had begun firing tear gas and panic spread in the stadium leading to a crush.