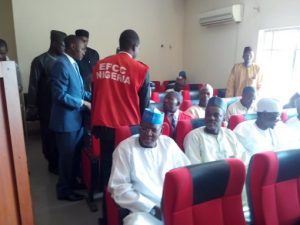 The Economic and Financial Crimes Commission (EFCC) has re-arraigned the former Jigawa governor, Sule Lamido, his two sons, and five others before Justice B.O Quadri of the Federal High Court, Abuja.

Lamido, his sons, Aminu and Mustapha were re-arraigned alongside Aminu Abubakar, Batholomew Agoha and three companies on an amended charge of 43-counts bordering on money laundering and illegal diversion of public funds.

They all pleaded not guilty to the charges.

The sureties for Lamido must have landed property that is not encumbered and depose to an affidavit that they are willing to forfeit the property to the Federal Government should he breach his bail condition.

The sureties for the other defendants must be civil servants in any ministry from grade level 15 and above who must present their tax clearance certificate for the last three years.

They must also have more years in service and produce a letter from the heads of their various ministries that they have no criminal record and have never been indicted before.

Other conditions of the bail include that the EFCC, which is the prosecuting agency, must verify the addresses of the sureties.

The judge ordered the defendants to also deposit their international passports with the registrar of the court and must not under any circumstance, travel out of the country without the permission of the court.

Justice Quadri ordered the defendants be remanded in prison custody if they fail to perfect their bail conditions within two months from the day of arraignment.

Earlier, counsel to Lamido, Mr Offiong Offiong (SAN) had prayed the court to allow the defendants continue on the previous bail conditions granted them by Justices Gabriel Kolawale and Adeniyi Ademola.

But the prosecuting counsel, Mr Chile Okoromma objected on the grounds that the charge against the defendants was new adding that what happened before the previous judges was “dead and in the past”.

Lamido and his co-accused had been arraigned before Justice Evelyn Anyadike of the Federal High Court, Kano State, on July 9, 2015 for allegedly misappropriating funds belonging to Jigawa.

Their case was later transferred to the Federal High Court, Abuja, where Justice Gabriel Kolawole, a vacation judge, granted them bail, and adjourned the matter to Sept. 22, 2015.

Following the acquittal of Ademola, Offiong prayed the court to transfer the matter back to Ademola on the grounds that 18 witnesses had already testified.

Okoroma objected on the grounds that the lead counsel for Lamido, Mr Joe Agi (SAN) was tried along side Ademola for corruption related offences.

He said that it would be wrong for Agi to defend a case before Ademola because the public perception would be that the judge was biased, which ever way the verdict went.