Home Trending Girls Run Mad, Become Useless After We Use Them for ‘Yahoo Plus’...
Facebook
Twitter
WhatsApp 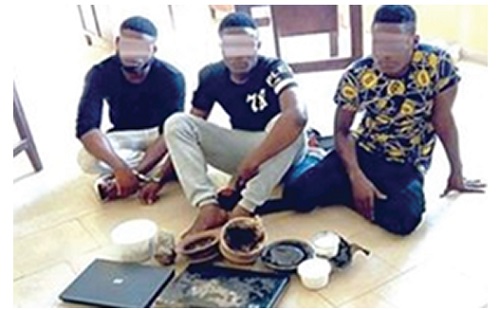 A 26-year-old man identified as Hakeem aka H Funds has confessed on the modus operandi on how he made money through yahoo-plus.

Narrating the story to NewsTelegraph, Hakeem revealed that he used juju on his victims which makes it easier for him to control them.

“After spending lavishly, we sometimes go bankrupt. So, we have no choice than to use metaphysical powers to hypnotise our victims online. The act of using voodoo is what people nicknamed ‘Yahoo Plus.’
“I use it so that the victim, otherwise known as a ‘client’ will fall deeply in love with me and obey my every command. At least, I have been into dating scam for a while now and I can boast of two cars and a house.” Hakeem confessed.

According to NewTelegraph, Hakeem revealed that he dropped out of university when he was in 100 Level. After dropping out of school, he embraced cyber fraud. Interestingly, he has been able to buy cars and build house through the scam.

Hakeem is toeing the path of many Nigerian young men and women who are embracing cybercrime. Many of them have left the traditional method of attempting to sweet talk victims into parting with money.

Today, they now use voodoo, otherwise known as ‘Yahoo Plus or Science’ to collect money from unsuspecting victims. Revealing more details, some other internet fraudsters revealed the cost of a particular voodoo depends on how challenging a certain internet fraud might prove to be.

They also confessed that aside from the fact that Yahoo Plus makes them richer, it also is a stress-free way of making money. They revealed that native doctors, Islamic and Christian clerics usually prepare the charms for them. Hakeem insisted that Yahoo Plus was the best gimmick to apply in online dating scam.

He added: “I use voodoo for dating scam. I use it to spellbind my online victim and make him or her easier to control. There are different kinds of voodoos; one is to use the image of the white client, another one is to make incisions on our hands, place our legs on a tortoise or take the client’s name to a cleric or native doctor. Sometimes, we take our phones and computer to the shrine.

The type of Yahoo Plus I do is to take client’s name to the shrine.” Another operator, Lanre, 25, said that he and his younger brother wouldn’t have succeeded in internet fraud, if not for the help of his mother.

He disclosed that it was their mother who introduced them to the new level of cyber fraud. Lanre said his mother didn’t believe in them at first until he carried out a scam and bought a car from the proceeds. The car got his mother so tickled that she decided to take them to a herbalist for charms.

He said: “Although my father is late, we have been successful in this cyber fraud business because my mother supports my brother and I. My mother took my younger brother and I to a woman’s place. The woman took us to a river and bathed us. Asides that, I do other sorts of rituals like ‘Oshole.’ Once you have done Oshole, you will succeed in every kind of internet scams. I must confess that I have achieved a lot by God’s grace. I haven’t seen any repercussion because I do go back to the herbalist’s place to renew my voodoo.”

Another internet fraudster, who gave his name simply as T Money, said that he had been using black magic for his cybercrime for long. T Money, a 200 Level dropout, disclosed that after he abandoned his university programme, he had tried his hands on several menial jobs, but failed to succeed in any.

He finally went into cyber fraud. The 27-year-old T Money explained why he abandoned the traditional Yahoo Yahoo to delve into the occult world of Yahoo Plus. He said: “When I started the internet fraud, I couldn’t earn much. I only earned enough to buy clothes, some pair of shoes and an IPhone.”

According to him, while his friends were hitting big money and living lavish lifestyles, he was counting pennies. He said: “I became intrigued on how my friends were making good money. I asked questions and got answers. It was the answers that led me into Yahoo Plus. It is what most of my friends do. I went to meet an Islamic cleric.

“I was into dating scam when I first started. The dating scam was not really fetching huge amount of money. I began using Yahoo Plus because my friends were making it big and buying cars. Once they make big money, they will go and lodge in hotels. I desperately wanted to belong. I wanted to know what it feels like to be rich. I had no choice than to meet the cleric whom I paid money for the ritual. Look at me today, I’m doing fine.”

A cyber fraudster, who introduced himself as Sir Cash, 28, said there were different categories of Yahoo Plus – ‘Oshole’ and ‘Irapada.’ According to him, the two are used to enhance internet scam operations.

He added: “There is another Yahoo Plus. It is very bad and dangerous. It entails using the ‘glory’ of innocent girls. You rub something like oil into the private part of a girl before having sexual intercourse with her. She either becomes sick or will never amount to much in life. We also use prostitutes. Most of these rituals have repercussions. One must be very careful. “Most of us do a voodoo called ‘Oshole.’ Oshole has little or no repercussion and most of us use it. The way Oshole works is that it compels the victim to pay money.”

According to Sir Cash, there are various repercussions to the use of voodoos on girls. One of the repercussions is insanity. He said: “There are some of our guys, who after using the voodoo get richer, but also forget to return to the shrines or clerics to renew their voodoo. That’s when problems start.”