Ghen-Ghen! Is Pepsi really going to drop its price?
If what goes down on the Twitter-sphere is anything thing to go by, then it seems like Pepsi may drop the price of its 50cl plastic bottle to N100, based on a tweet from Pepsi’s handle yesterday.

So here’s what happened, Tekno tweeted on Saturday that he wanted to touch hundreds of Nigerians at the same time with 2million naira and asks for creative suggestions on how to, and twitter goes agog with all sorts of requests. 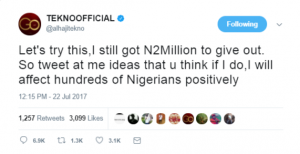 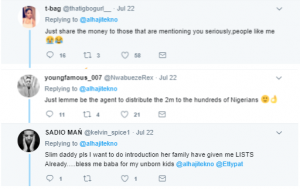 Next thing, some really ambitious dude requests that Tekno should appeal to Pepsi to reduce the price of their 50cl plastic bottle, as that would touch millions not just hundreds … and we agree. Tekno though, smart guy, quickly hands it over to Pepsi lol.. No time. Clearly, the request is beyond him. 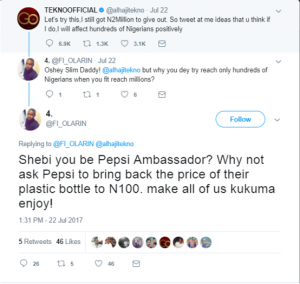 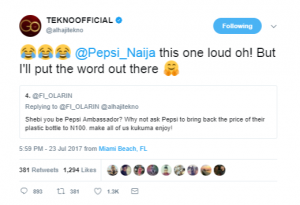 Interestingly, in a totally unexpected turn of events, about 24 hours later, Pepsi responds! See for yourself below.

Now the real question we need to ask Pepsi is ..what does #NoShakinCarryGo really mean? Is the price really coming down? In these tough times, a price drop will really touch millions of Nigerians.
We choose to be positive about this seemingly innocent tweet because the Pepsi 50cl bottle dropping back to N100 will be the best news ever. It’s the little things that count especially in the face of current realities.  Our eyes will be glued to Pepsi’s twitter page from now, hopefully we are in for an unexpected surprise. We are ready to carry go though no shaking!